After leaving the Grand Canyon on our recent western adventure, we headed west, spending that night in Barstow, California. The next morning, we drove to Three Rivers, California, where we stayed while visiting Sequoia and Kings Canyon National Parks. The two parks adjoin each other, and you hardly know when you leave one and enter the other.

It was a little too late in the day to begin a tour of the parks, but we did drive to the entrance, just to be sure we knew how to get there the next morning.

That next morning, we drove The Generals Road, which took us to the General Sherman Tree parking area. From there, we had to hike about four tenths of a mile to the tree itself, all downhill. The General Sherman Tree is reported to be the largest living tree in the world. It was pretty impressive, but there were lots of impressive trees along the trail. The hike back to the car was a little harder since it was all uphill and we were at an altitude of 7,000 feet; but we made it. 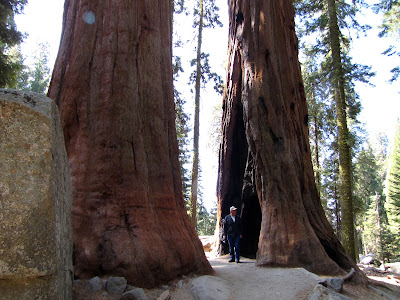 Doug, standing between two trees on the Sherman Tree Trail 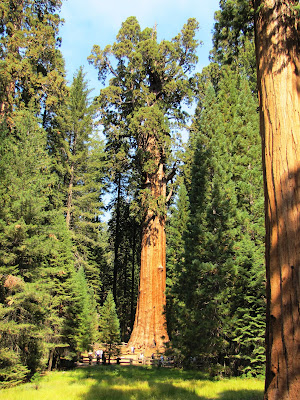 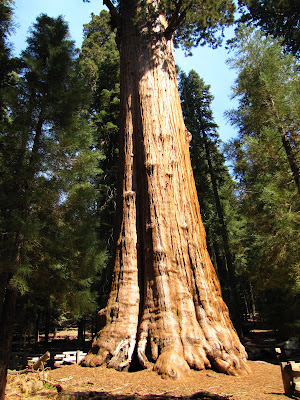 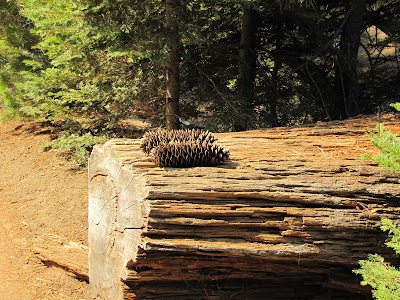 Look at the size of these pinecones!

After huffing and puffing back to the parking lot at the start of the trail to the General Sherman Tree, we ate the lunch we had brought with us. Then we continued north on the Generals Road, which was very winding as it climbed the mountain by way of many switchbacks. Near the top, there was construction going on, with delays of up to an hour. We timed it so that our wait was only 20 minutes. It was comfortable sitting in the van...more so than out of the van. The sun was very intense at that altitude, making it very hot even with the cool air temperature.

We drove on north to the Grant Grove in Kings Canyon National Park. There, we hiked another trail of similar length but without the significant grade that the Sherman Tree Trail had. The General Grant Tree is reported to be the second largest living tree in the world. It was also very impressive. And, again, there were many impressive trees along the trail. Maybe even more than on the Sherman Tree Trail. 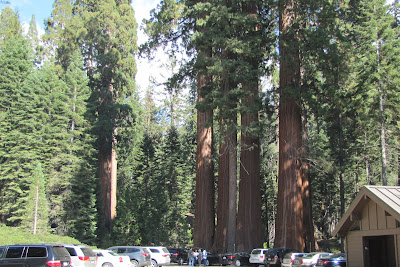 These giants stand along one edge of the parking area at Grant Grove. 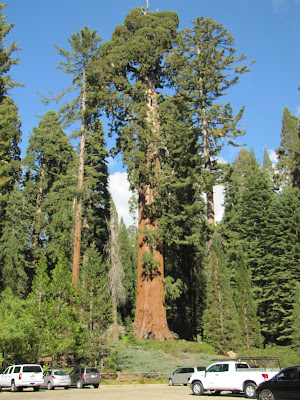 This one stands near the beginning of the walk to the General Grant Tree. 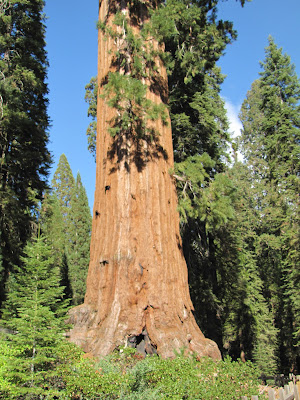 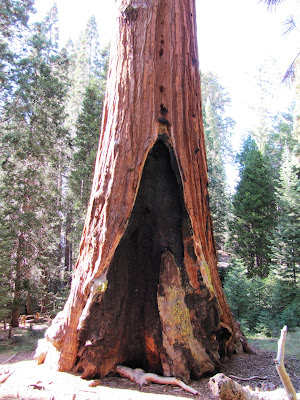 Fire scar on one side of the General Grant Tree

The bark of the Giant Sequoias is resistant to fire. Many of these trees (maybe most) bear significant fire scars, but the fire rarely kills the tree. The biggest risk to these trees is lightning, which can split a tree in two. 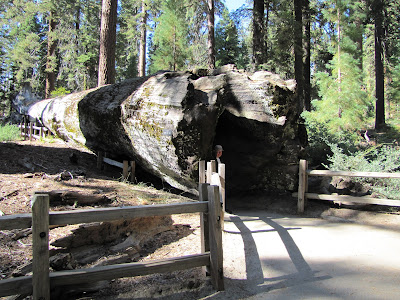 The Fallen Monarch (with Doug standing next to it for perspective)

A sign at the site of the Fallen Monarch in Grant Grove states that a high tannin content makes Sequoia wood indigestible to fungi, bacteria, insects, and other decay organisms. Thus, the decay of this wood takes place very slowly. The Fallen Monarch has remained virtually unchanged for well over 100 years, and who knows how much longer.

The sign goes on to say that, after the Grove was set apart as General Grant National Park in 1890, the log was used for awhile as an employee camp. It has been used as a house, a saloon, a stable for U. S. Cavalry horses; and early day visitors to the Big Trees were served meals and liquid refreshment here. 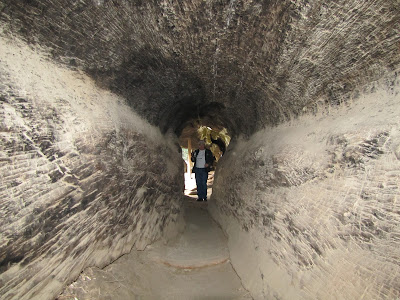 This is a picture of Doug inside the Fallen Monarch

Near a stump, known as Centennial Stump, which is 24 feet in diameter, there is a sign that says, in part: "This tree was cut in 1875, and a 16 ft. section sent to the Philadelphia Centennial Exhibition of 1876. Only the outer shell was was exhibited, the parts being reassembled after shipment. Eastern people refused to accept the exhibit as part of a single tree and called it a 'California hoax.' It took 2 men 9 days to chop down the tree."

Posted by Linda at To Behold The Beauty at 10:11 PM