In all our visits to Ouabache State Park, we've never seen a deer there. Until last week. A doe wandered out through the tall weeds that have grown in the dry lake bed this summer. We were sitting under the trees bordering the lake, reading; and I just happened to look up in time to spot her. She stayed long enough for me to capture a few photos. 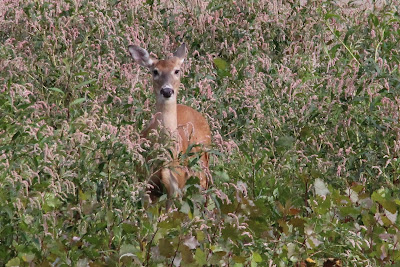 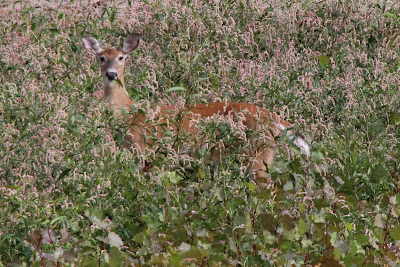 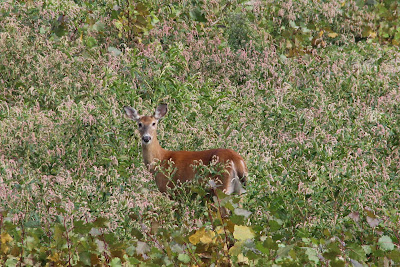 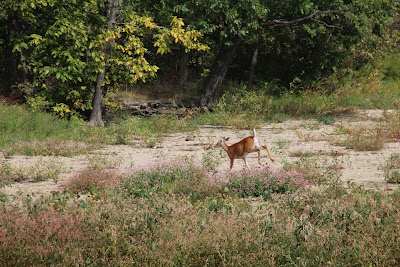 A park employee told us that the beach construction that has caused the lake to remain drained all summer has been scheduled for completion next year. She said that another, larger, state park had a greater need which caused the beach project at Ouabache to be put on hold for now.

But the opportunity to see the deer last week made us glad for the dry lake bed that lured her out into the open.
Posted by Linda at To Behold The Beauty at 10:30 AM 20 comments:

It was seven years ago today that I began blogging, at the urging of two friends who were then bloggers themselves but have since discontinued their blogs in favor of Facebook.

I can't really lay claim to a seventh anniversary of blogging, though, because I took a year off in 2014-2015, when my brother-in-law was going through some serious health issues and needed our help. So, really, I can claim only six years. 😉

After my year away from blogging, I didn't know whether there would still be anyone who would even notice my return to it, but there were some dear blogging friends who were back visiting and commenting as if they'd been there all along, just waiting for my return. It warmed my heart.

There haven't been many photos from the summer to share on the blog, but following are a few miscellaneous images to document some of our activities. 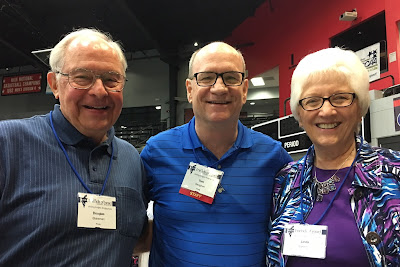 The above photo was taken in July at the annual Friends of Israel Prophecy Conference at Winona Lake, Indiana. Doug and I have been attending at least some of the sessions of the conference for several years. The picture shows us with one of the staff members of the Friends of Israel organization.

Back in the sixties, the one place in town that would hire high school graduates with no prior experience was Lincoln National Life. The pay wasn't great; and many of the young women moved on to better-paying jobs after gaining the needed experience. So, generally speaking, we were all in our late teens and early twenties. It made for some great camaraderie among coworkers. Several of us even vacationed together a couple of times at Michigan dude ranches.

In 2005, the dude ranch friends organized a reunion when Mary, our only out-of-towner, came back to town to visit family. Since then, it's become an annual tradition to get together when Mary comes to town. The photo above is from this year's reunion on July 22nd.

A new restaurant recently opened in our area, and we made plans to go there with our friends, Jim and Sandy, on August 12. Sandy decided to stop at the restaurant that afternoon, to see if they took reservations. When she pulled into the parking lot, she parked next to a classic car. Two men were standing nearby, and one of them (Don, as she learned later) quickly approached Sandy's car and opened the car door for her (apparently thinking she looked like the type that might bang her door against the classic car next to her).

Sandy asked Don and his friend (Dick, as she learned later) if they knew whether the restaurant took reservations. They said no but offered to hold a table for her.

Well, they weren't holding a table for us when we arrived for our dinner date, but they showed up while we were eating. They presented Sandy with a DVD of a movie called "Clerical Errors," in which Don had played the leading role.

I did a little poking around on the internet after I got home, and it turns out that Don had appeared in two other movies, as well, before suffering serious injuries in a bicycle accident in 2015. In addition, I found this interesting article which had appeared in our local newspaper in January, 2016. It's a little long, but it made me glad I'd had this brief encounter with this gentle soul.

Well, that's it for this anniversary post. I want you all to know how much I appreciate you. You're the ones who deserve a pat on the back!

Our friends, Terry and Diane, invited us to join them in Portland, Indiana on August 23, for what is billed as "the world's largest Gas Engine and Tractor Show." Well, I don't have any pictures from the show itself because Diane and I let the guys go there while she and I focused on the area garage sales. Next year, though, Lord willing, I'll try for some pictures from the show.

During a break from garage sales, Diane took me to the Jay County Courthouse, a beautiful structure both inside and out.

Unfortunately, I don't have any photos of the inside of the courthouse that would do it justice.

The yard of one of the homes having a garage sale was so beautiful that I just had to snap a couple of photos: 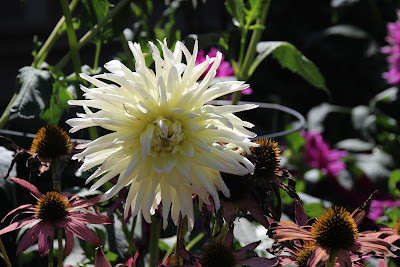 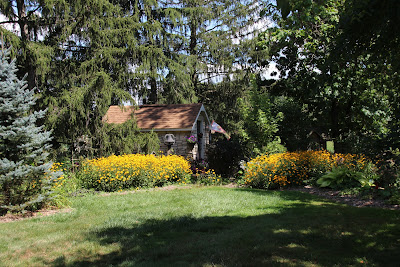 As I've mentioned before, cataract surgeries and the related appointments have taken up much of the last three months for Doug and me. But, with Doug's second surgery this past Tuesday, the surgeries are finally behind us. And I've even gotten my new glasses already. Doug still has to wait a few weeks or longer to get his.

The opthalmologist who did our surgeries is Dr. J. Rex Parent. At the follow-up appointment on the day after the patient's first surgery, Dr. Parent likes to have a photo taken with the patient and family member, which he then presents to the patient along with a rose and a gift bag containing a coffee mug and a windbreaker jacket.

I don't have a picture of my beautiful lavender rose because we ran errands that day before going home. It was a hot day, and the rose didn't survive the afternoon heat. But it perectly matched Dr. Parent's scrubs. I did, however, get some pictures of the rose given to Doug: 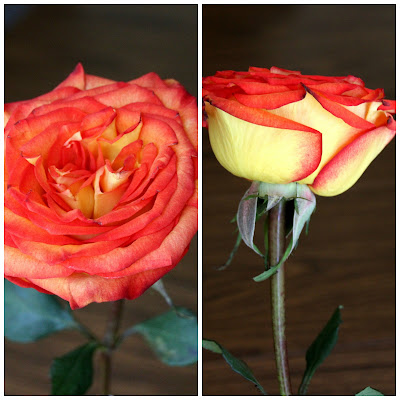 Lastly, I just had to include my before and after eyeglass prescriptions: 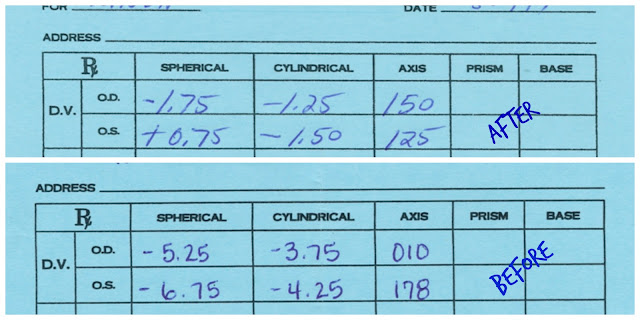 The numbers probably don't mean much to most of you, but let me tell you...the after-surgery prescription is a whole lot better than the before one.

I can now see to get around nicely without glasses, which I could never have done before. I used to need glasses to find my glasses if I misplaced them. My new eyes do, however, need glasses for driving; and glasses are helpful for reading and computer work.

The lenses on my new glasses are so thin! It's absolutely amazing to me because I've worn thick lenses for most of my life.

I'm so grateful for this new ability to see...grateful to God first, of course, and grateful for the technology and doctors who made this miracle happen.