Don't you just love spring...all the spring flowers popping up and the gorgeous flowering trees and shrubs? It's such a beautiful time of year, probably made more so as all that color comes on the heels of the winter season which is so black and white.

Here are a few pictures of spring in our backyard.

The next three images show some of the blossoms on an apple tree in our yard: 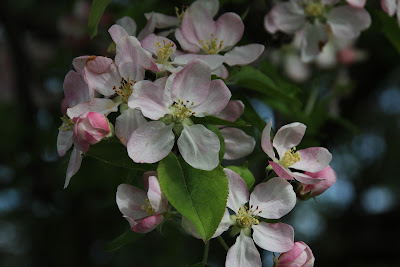 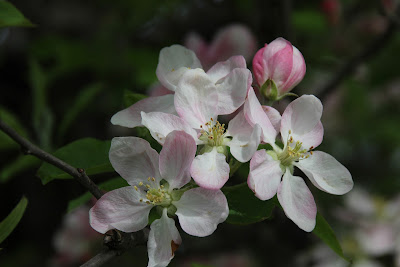 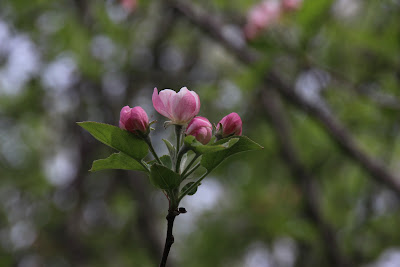 Next are two views of the backyard, essentially the same, but taken several years apart:

I know the above picture was taken at least 17 years ago because that old satellite dish pole was removed in October, 2000. When we bought the house in 1989, there were no trees in the backyard at all, except for an oak on one side and a maple on the other. We wanted more privacy, so we put in lots of evergreen trees and flowering trees and shrubs. We've enjoyed the park-like feel of the yard over the years, and it's become home to lots of birds, squirrels, and rabbits.

The arrangement of cut flowers pictured above was made of cuttings from some of those trees and shrubs. That spring of 2008, it seemed that everything was blooming at once. On this particular day, Doug surprised me by bringing in these cuttings and arranging them in a vase for me to discover on my next pass through the kitchen. I was so touched by that since Doug isn't usually a very spontaneous guy. But then he goes and does something like this. He's a keeper.

This past winter was a mild one, but it seemed to have more of a negative effect on my mood than previous winters. However, spring has sprung at last in Indiana. Yesterday was a beautiful, warm spring day; and Doug and I took advantage of it to visit Ouabache State Park, about an hour from our home.

The lake had been drained for, according to signs posted in the area, beach construction. We're not sure what that means since it doesn't seem to us that the water is suitable for swimming.

Of course, some water had accumulated in the lake from recent rainfall. That seemed to provide an irresitable attraction for some sandpiper-like birds, apparently passing through on migration.


We spent a most enjoyable afternoon at the park, relishing the warm sunshine, good books, and each other's company.