A Nursery Worker I'm Not!

I've never really been good with children. I've never had any of my own, and I wasn't particularly stellar as a babysitter when I was a teenager. But that doesn't discourage churches that I've attended from asking me to help out in the nursery.

You can read about one of my nursery experiences here.

There is a young single mom who attends our church's mid-week Bible study. Her four-year-old daughter, Holly, accompanies her. Holly would be bored to distraction in the adult Bible study, so each week two or three of the women have been taking turns staying with Holly in the nursery for the duration of the study.

When more volunteers were sought, I didn't raise my hand.

But, the next week, Holly herself asked me to go to the nursery with her. I figured, since she specifically asked me, I should give it a try.

We hadn't been in the nursery for more than a few minutes when Holly announced that she had to go to the bathroom. I told her okay but she would have to be quiet when we passed the room where the Bible study was going on.

As we passed that room, Holly gave a big wave and called out, "Hi, Mommy!" This was followed by another wave as we returned to the nursery.

A few minutes after our return to the nursery, Holly told me that she'd forgotten to poop when she went to the bathroom earlier and that she really had to do that. I told her I didn't believe her, but she insisted that she had to go.

I told her okay, but I'd better hear a plop, plop in the toilet.

Back down the hall we went. Another wave. Another "Hi, Mommy!"

Holly went into the stall, and I soon heard the plop, plop.

A little voice said, "Did you hear that?"

That little charmer could almost make a nursery worker out of me. But not quite.

There is a magnificent mansion that has recently gone up for sale in Fort Wayne, Indiana. The man who built the mansion about 19 years ago is Dick Freeland, who owned 48 Pizza Huts in Indiana and Ohio, as well as four KFC restaurants.

Dick Freeland set a standard of excellence in his restaurants that I've never seen matched in any Pizza Hut outside of this area. He was a very rich man, and a very generous man, whose philanthropic activities were accomplished without fanfare.

Mr. Freeland died about two and a half years ago, and the mansion he built has been put on the market. Locally referred to as "The Castle," the mansion has been the source of much curiosity. It's location is very secluded, not visible from outside the property.

With its being listed for sale, however, we have the opportunity to see the magnificence through a virtual tour, posted by the realtor who has listed the property.


Here is the property description on the realtor's website:


"A rare opportunity to own a work of art, this is one of great mansion of the world with over 38,000 GBA SF of museum quality construction. In addition to the main home there is a 8,000 sq. ft. home, a 6,720 sq. ft. stables with guest suite, a 7 acre private lake, 16 fireplaces, 16 bedrooms and 26 baths is for all the buildings on the property. Built by craftsmen equivalent to those employed by the Astors or Vanderbilts, this stone mansion has all the elegance and grandeur of a bygone era. The estate has 10 buildings, elevator to all 3 floors, deluxe stables plus an addition 25 acre world class equestrian property can be purchased for an additional $2,500,000All information is approx. and must be verified"

It's priced at 30 million dollars.

I published a blog post here about my Aunt Lena's visit in 2013, when she was 90 years old. In that post, I mentioned that she'd visited five years earlier, in 2008. Today's post is about that earlier visit.

As usual, Aunt Lena's 2008 visit was timed to coincide with the family reunion in July. One of the things we did together while she was here was to visit the old homeplace and the nearby cemetery.

The tombstone in the above photo marks the grave of my dad's mother. Dad's father's name is also on the marker, but he's not really buried there. He had moved to Oklahoma following the death of his wife, my dad's mom. There, he had remarried and had two daughters, one of which was Aunt Lena. He died in Oklahoma and is buried there.


When we were there in 2008, the farm was still in the family and was still being farmed by a member of the family. I don't think the house was being lived in at the time, although the last surviving member of my grandfather's generation still called it home. She was in a nursing home and has subsequently died. The last I heard, the farm was to be sold and the buildings torn down. I haven't been back there to check on it, though.

I have only one memory of visiting the farm as a youngster, so the only real connection I feel to it is that of a family heritage. But even that slight connection feels significant.

Aunt Lena's health has deteriorated significantly in the last few years. She lives in California, where she can be close to her son and his family. In spite of her health issues, her spirit and vitality are still evident.

Seeking an answer to Betsy's question, I found the following information on the internet: 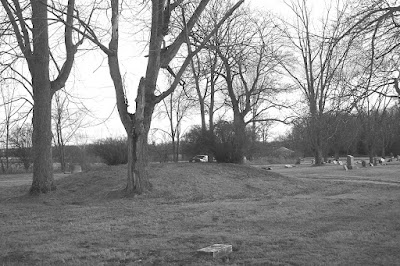 "Early native American Burial mound located in Warren Indiana in the Red Man cemetery.  The encircling ditch can still be seen around the mound. The mound is proto Iroquois who had assimilated many of the Adena burial mound and material culture traits. A few years ago a university archaeologists was seen trying to steal artifacts and skeletal remains from the mound."


Here's the link to the blog post where I found the above photo and information: http://moundbuilder.blogspot.com/2011/10/mound-builders-in-huntington-county.html

I’ve never noticed that mound at the Red Men Cemetery. Now I’m curious and looking forward to another visit to the cemetery to see it. I’m curious about the old home place, too, whether it’s still standing or not.

There is an osprey nest located at a small beach park near Tarpon Springs, Florida. It amazes me that these birds are comfortable nesting in such a crowded area, but it also delights me that the nest is so accessible for photography. I'm pretty sure this pair was incubating eggs because, soon after the one in the following photos took off from the nest, its mate landed in the nest and appeared to be rolling the eggs. Unfortunately, I missed getting any photos of that. 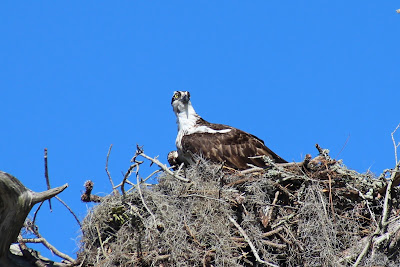 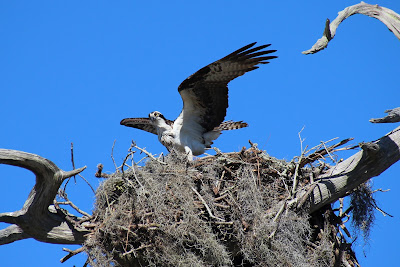 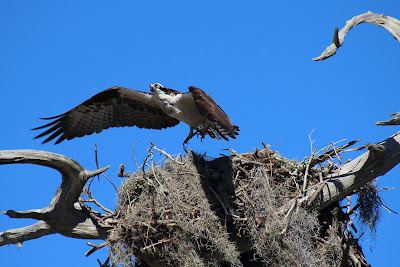 While I was taking the above photos, Doug was shooting a video which I've included below. You can slow the action by clicking on the tools icon and choosing a speed of .5 or .25.

We always enjoy watching the pelicans, too, especially as they dive into the water after fish. Following are a couple of snapshots of pelicans, followed by a video that Doug shot of a pair of them diving. Again, slowing the speed of the video will help you see the action in a little more detail. 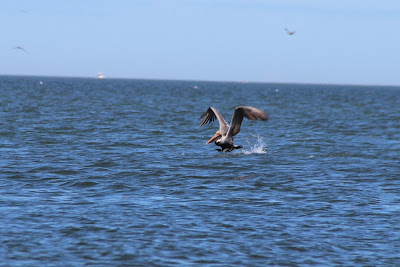 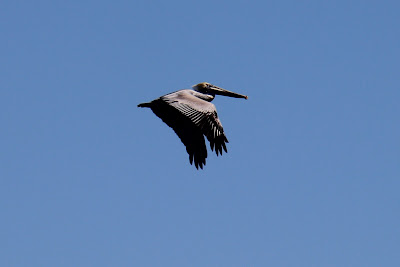 Posted by Linda at To Behold The Beauty at 9:20 PM 7 comments: