These photos are all from early October, as the fall colors were just beginning to show themselves.


We took a different route home from the park that night, driving down some back country roads; and our route took us by a farm where Luke Bryan was performing a concert. Judging from the amount of traffic on those back roads, the concert must have been well attended...but many were arriving late due to the traffic jams.


Not far from the location of the Luke Bryan concert was Maples United Methodist Church. The image of the church was a drive-by shot. It looked so pretty in the late-afternoon sun, with the ripened soybean field in the foreground, that I just had to try for a photo.

While stalking butterflies at Ouabache State Park on October 5, I found a single plant of purple blossoms that were loaded with winged things feasting on the nectar.

We returned to the park five days later, and this plant was completely withered. I realized how blessed I was to have seen it, and the winged things it was nourishing, the previous week.

With the lake drained at Ouabache State Park this summer, I've had to search for things to photograph on our occasional afternoon visits there. Following are a few random shots from September.

This last image isn't from the park. We were driving by a small local airport on October 2, when the sunset deepened to glorious colors. Doug stopped to let me get a picture of it.

More From Our Back Roads Amish Tour

After our visit to the Amish school on September 26, our next stop was at an Amish home, where Lena, the woman of the house, talked with us about a typical day in the life of an Amish wife. 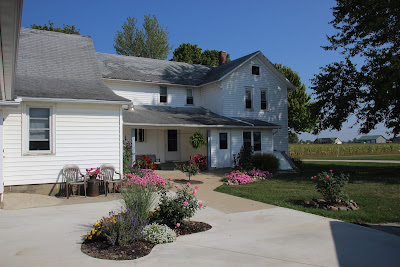 Above is a picture of Lena's home. She actually met with us in a separate building, though, one she said they had built for family gatherings. Our bus driver, Jan, who is also an associate pastor at our church, didn't think I was taking enough pictures. So he grabbed my camera and began taking some shots, surreptitiously, because Amish don't like to have their pictures taken. The photo on the left above shows Lena, her two-year-old son, and our guide, Allen, from the Blue Gate. The photo on the right above shows part of our group and the room in which we met.

Jan easily relates to children, and the little boy was quickly drawn to him. When Jan teasingly asked him if he'd like to go home with him, Lena told Jan that her son probably had no idea what Jan was saying. She said Amish children are not normally taught English until they go to school, although she and her husband usually started them at about age five. Until then, they speak exclusively in German.

Our final stop on this tour was at the home of an Amish bishop. As much as I enjoyed the previous two stops, this was my favorite by far. The bishop, Glen, and his wife, Carolyn, invited us into their home for the visit. The two of them sat at the kitchen table, while we sat on an assortment of chairs that had been provided for us in the same room.

Glen is 72 years old. His wife of fifty years had died a few years earlier, and he had married Carolyn, who is 20 years his junior, just over two years ago. Carolyn had never been married before and had worked among English most of her life. So English came easily to her. Not so with Glen, who rarely spoke anything but German. As a result, he occasionally had to look to Carolyn for help in finding the right words as he talked with us about his life as a bishop and the process by which an Amish bishop is chosen.

Glen has been serving as the bishop of his church district for 30 years. Amish bishops receive no pay for holding that position and must earn their living by other means. Glen is a farmer and also raises deer, one of which is pictured below. 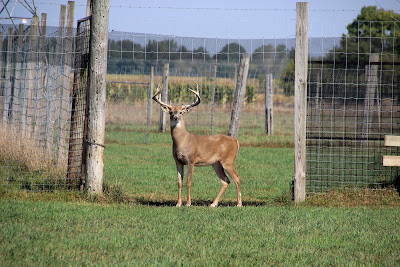 As we left Glen and Carolyn's home, Carolyn gave each of us a freshly baked cinnamon roll that was absolutely melt-in-your-mouth delicious!

Of course, that delicious cinnamon roll didn't keep us from stopping at a local restaurant for lunch afterward.

Lastly, we found time for a little shopping before heading for home. The following two photos were taken from the parking lot of the shopping complex. 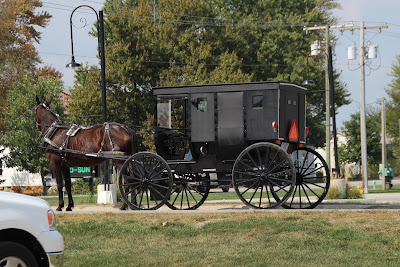 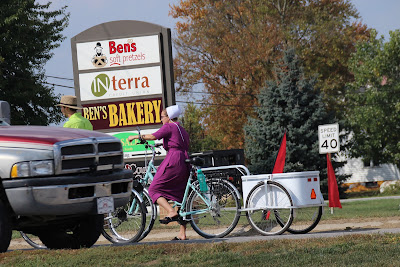 This is the second year that our church has taken this tour. Doug and I couldn't go last year. But I hope we'll be able to do it again next year.

Email ThisBlogThis!Share to TwitterShare to FacebookShare to Pinterest
Labels: Amish

On September 26, Doug and I joined other senior adults from our church for a Back Roads Amish Tour in Shipshewana, Indiana. The area in and around Shipshewana is home to the largest Amish settlement in the state, and the third-largest nationwide.

The tour was arranged through Blue Gate, a major tourist attraction in Shipshewana, which includes motel, theater, and restaurant. Blue Gate provided a knowledgeable guide who made advance arrangements for our group to visit an Amish school, an Amish housewife, and an Amish bishop.

The large classroom accommodates grades 1 through 8. The grades are divided between the father and daughter who serve as teachers, with the intent of giving each teacher approximately the same number of students. Since some grades have more students than others, the division isn't quite perfect. I believe the daughter had 15 on her side of the classroom, while the father had 17 on his side. A curtain can be drawn between the two sides to help reduce distractions between the groups, but it can also be pulled back to allow the groups to participate together in common activities such as singing.

There is an apartment on the second floor, to accommodate a teacher that might need it; but it isn't currently in use. 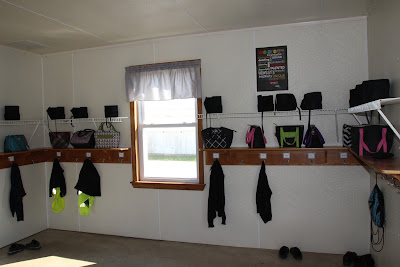 I'm not sure what the Amish would call this; but, when I was in school, we would have called it a "cloakroom." This side appeared to be for the girls' wraps and lunch containers. There was another room on the other side of the entrance for the boys' things. 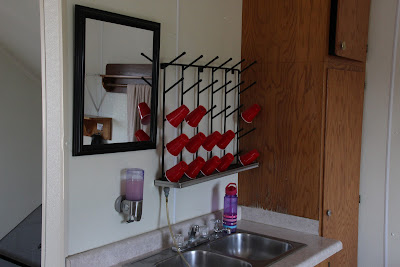 Each of these plastic cups had the name of one of the students written on it in permanent marker. This was on the side of the girls' cloakroom. I imagine there was another just like it in the boys' cloakroom. I was trying to be inconspicuous about my picture taking and didn't make it over to the boys' side. 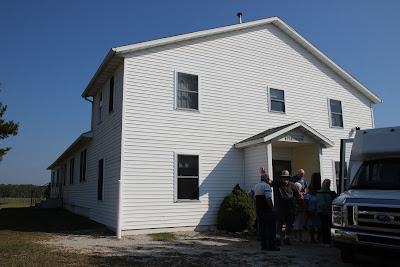 This is a little better picture of the front of the schoolhouse, taken as our group was leaving. 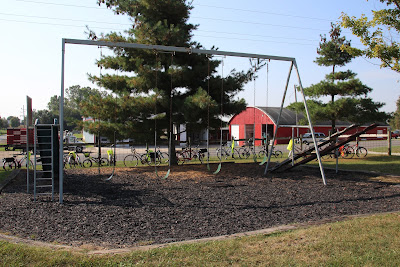 And this last photo is a shot of the playground, with a slide, swings, and teeter-totters, as well as the bicycles which the students had ridden to school.

Amish, including the teachers, don't attend school beyond the 8th grade. Our guide told us later that the male teacher at this school had written the story problems for all the math books for all the grades, with each story problem dealing with things found in Amish culture.

Our group sat on benches at the back of the classroom, while the teacher provided information about the school and answered our questions. Then he led the students in a song for us before we left.

This has already become a long post, so I'll save the next two stops for the next post.