Beauty & Peace in the Smokies

My last post focused on the fire damage in Great Smoky Mountains National Park and in and around Gatlinburg, Tennessee. But, lest you think that there's nothing left in the area but burned-out buildings and scorched landscapes, I'd like to assure you that we still found the area beautiful and still experienced the sense of peace that always comes over us when we're there.

We enjoyed some beautiful spring-like weather during our recent short stay. I've been experiencing some foot pain (plantar fasciitis), so we weren't able to hike, but we did take the very short walk back to Cataract Falls.

A quick story about going to the outlet mall...Doug saw a store advertising wallets, and he needed a wallet. So we stopped in. It was a Wilson's Leather store. They didn't have what he wanted in a wallet, but they did have what I wanted in a leather jacket. We thought about it for a couple of days, and I did some online research to look for a better price. But, in the end, we went back to get it. And I love it.

One of our favorite places in the area is the Douglas Dam overlook, so we went there on the day before we came home. 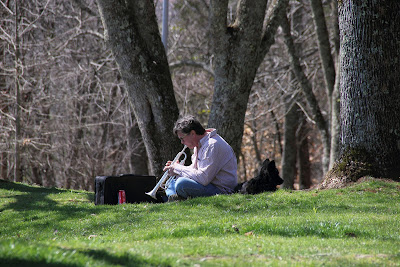 We've seen lots of unusual things on our visits to Douglas Dam. This time, it was a man playing a trumpet (later, a saxophone), accompanied by his faithful dog, Jazzy.

Another time when we were there, some teenagers had strung a rope between trees and were practicing tight-rope walking. Fortunately, the rope wasn't very high off the ground because they hadn't finely tuned their skills yet.


Before leaving the dam, we like to go down to the base of the dam, where birds gather to fish. There are blue herons, cormorants, egrets, terns, and bald eagles. An alarm goes off when water is about to be released through the dam, and it's like a dinner bell to the birds. Apparently the incoming water is filled with fish.

The Smokies After the Fire

Doug and I got away for a few days last week to visit our beloved Smoky Mountains. We'd been wanting to get down there ever since the wildfires had raged through the area in late November, 2016; but this was the first opportunity we'd had to do it.

During the time since the fires, much had been done to deal with the damage and destruction. Some 2400 structures had been damaged or destroyed in and around Gatlinburg. Most of that debris had been removed, at least in the areas we saw. But we stayed away from some of the hardest-hit neighborhoods. 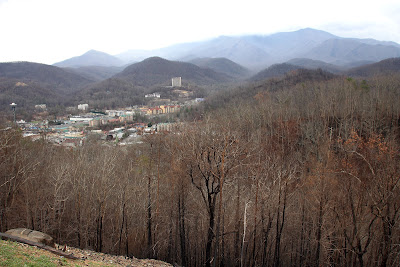 The above photo, taken from the Gatlinburg overlook, shows the scorched trees in the foreground. 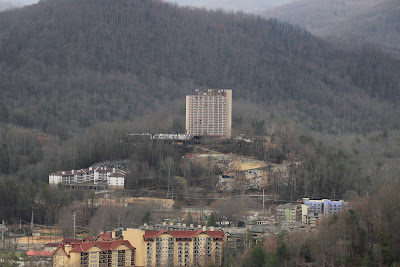 The Park Vista Hotel, the tall, round hotel in the photo above, was surrounded by the fires. The blackened area in front of the hotel shows how close the flames were on that side of the building. A little below the Hotel, about the middle of the photo, there are several burned-out structures visible. 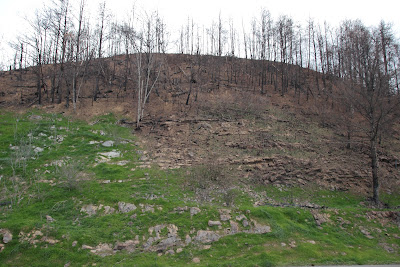 Crews had sprayed a mixture of fertilizer and grass seed along the burned areas next to the roadways in the national park, resulting in lush green grass growing close to the road. But, a look above the green reveals some of the burned area. 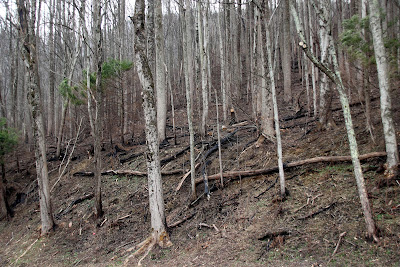 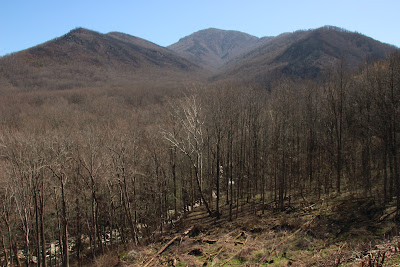 We've often stopped at the overlook from which the above photo was taken, but we'd never seen the river at the bottom of the hill before. The fires had burned away much of the ground vegetation. You can also see a blackened strip coming down the ridge of the mountain on the right. 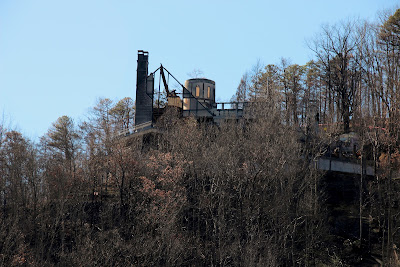 The photo above shows what's left of the Smoky Mountain Castle, situated high on a mountain, overlooking Gatlinburg. To see pictures of the Castle before the fire, click here. A bit of the Castle's history can be found here.


The fire started in the Great Smoky Mountains National Park, near Chimney Tops, a popular hiking destination. On November 28, 2016, winds approaching 90 miles per hour swept the fire down the mountain and into the town of Gatlinburg, with little warning. In addition to the 2400 damaged or destroyed structures, 14 people lost their lives. Two juveniles are currently being held in Juvenile Detention, accused of aggravated arson.