August 23rd was our final day at Rocky Mountain National Park. Entering the park by way of the Fall River Entrance Station, we drove up the 11-mile, one-way, unpaved Old Fall River Road to the Alpine Visitor Center, located at an elevation of 11,796 feet (3,595 m) above sea level.

Just after entering the national park, we saw two bull elk alongside the road. One stayed partially hidden in the bushes, but the other one was a more cooperative photo subject.

Before starting up the Old Fall River Road, we stopped to walk over the boulders to a waterfall in the Alluvial Fan area, created during a 1982 flood caused by the failure of the Lawn Lake Dam. For more information on that flood, click here.

Next stop was the Alluvial Fan Picnic Area, where we used the restrooms and had lunch before starting up the 11-mile Old Fall River Road. In the picnic area parking lot, Doug struck up a conversation with a woman who was wearing a University of Michigan jacket. In the course of the conversation, we discovered that the woman is from the same area where Doug grew up in Michigan, and she now lives about 20 miles from where we currently live in Indiana. She knew some of the people Doug knew in Michigan, and we have mutual friends here in Indiana. It truly is a small world.

There are several beautiful cascades along Old Fall River Road, as well as Chasm Falls, a lovely waterfall viewable from a platform a short hike down the hillside.


After reaching the Visitor Center, we returned to Estes Park by way of the paved Trail Ridge Road.  At one scenic overlook, a Clark's Nutcracker proved to be an irresistible beggar.

The bird would sit on the informational sign at the scenic overlook until it selected a target from whom to beg. That would be us. He came and sat on our outside rear view mirror, begging quite vocally. Demanding is more accurate. Now, we know the rules against feeding wildlife, but how could we resist this one? Doug yielded and gave him a peanut from our trail mix. The bird continued to sit on our rear view mirror as we pulled away from the overlook until becoming convinced that he would have more begging success by returning to his original perch on the sign.

As we neared the end of Trail Ridge Road, approaching Estes Park, we were treated to sightings of a bull moose lying in a meadow and a herd of elk grazing near the road. 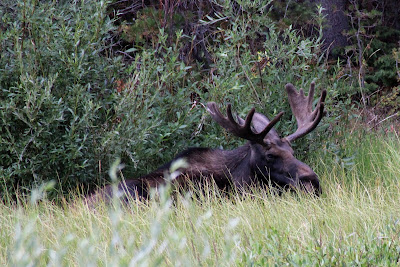 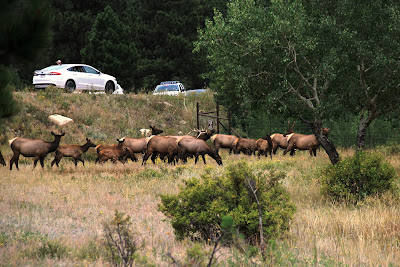 Here are some video clips from August 23, in Rocky Mountain National Park:

We had planned to visit Mount Evans the next morning, August 24, before starting for home, but the weather was awful there. So we pointed the car toward home and put 500 miles behind us before stopping for the night in Salina, Kansas.

A text from a friend that afternoon said that a tornado had touched down near our home. My niece, Beckie, and her husband drove out to check on the house; and, thankfully, all was well. The worst of the tornado damage was about four miles away. It didn't even look as if the wind had blown at our house.

Beckie did text this photo of our mailbox to me, though, with the tongue-in-cheek comment that she didn't think this damage was due to the tornado: 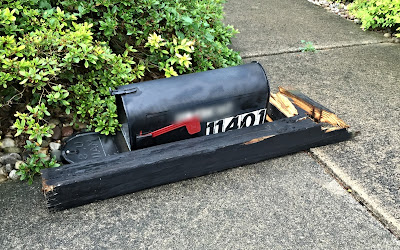 On August 22, our first day at Rocky Mountain National Park, we drove the length of Bear Lake Road, which had been closed when we were there in 2012. A beautiful spot along that drive is Sprague Lake.

We always love a good waterfall, so we decided to hike the trail to Alberta Falls.


After our hike to Alberta Falls, we decided to drive about 30 miles south of Estes Park to the Wild Basin area of the national park, for a short hike to another waterfall, Copeland Falls.


On the way back to Estes Park from Wild Basin, we stopped to get a picture of the Chapel on the Rock at Allenspark, Colorado. It's open to the public, but it was closed for the day by the time we got there.

And now, some video from our waterfall hikes:

I'll have one more post from the Rockies next time.

A Moose and a Sunset

On August 21, we drove from West Yellowstone, Montana to Estes Park, Colorado. I don't know what I was thinking when I made those plans because it's a drive of over 600 miles (966 km), a good part of it through the mountains. It wound up taking us about 13 hours, including a few stops along the way. If we were to do it again, I'd plan to stay overnight somewhere in between.

Needless to say, there weren't many stops for photographs along the way. However, there were two exceptions. The first was for a young bull moose, which we spotted in Pinedale, Wyoming. The moose was in a field right beside the main road in downtown Pinedale. 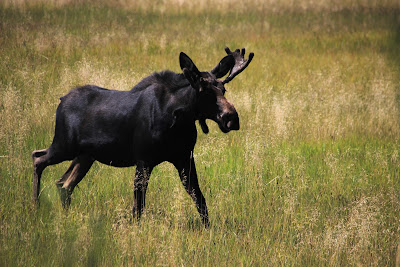 There was a convenient place to pull our vehicle off the road beside the field. I jumped out with my camera and began snapping photos of the moose on the far side of the field. Suddenly, his head came up. He stared at me for a few seconds, then began running toward me. That's when I captured the above photo.

I retreated to our minivan; but, when I saw that Doug was getting out with the video camera, I joined him. The moose had turned away from the place where I'd been standing and had stopped several yards to our right. Another couple was standing at that location, and we walked down to join them. Suddenly, the moose snorted and moved quickly toward us. We all ran like sissies. The fence between us didn't look strong enough to stop a determined moose, but Mr. Moose was apparently not that determined. I snapped one final shot of him before getting into the relative safety of our van. 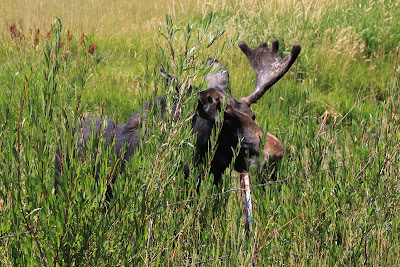 The second photo stop was prompted by a beautiful Colorado sunset: 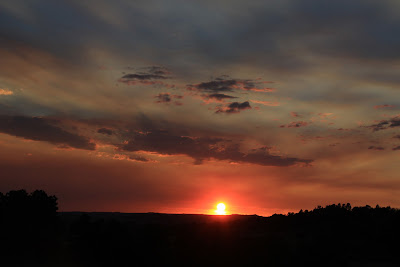 Following is a video of our moose encounter. The first part is after I'd retreated to the car and then gotten out again with Doug and his camcorder. In the last part, you'll recognize when we fled from the second threat.

Mark, at http://www.all-about-moose.com/, estimates the age of this moose at one and a half or two and a half years. You may have noticed that the the right antler seems deformed. Mark says that the young bull probably received an antler injury earlier this year. He believes that the antler will grow in normally next year.

Our final stop on this trip was Rocky Mountain National Park, where we spent two days before starting for home. Stay tuned.


Morning Glory Pool was named for it's once-blue color that resembled the deep blue of its namesake flower. Apparently, over the years, people have tossed coins and other debris into the pool. The debris became imbedded in the sides and vent of the spring. As its temperature dropped, orange and yellow bacteria that formerly colored only the periphery of the spring now spread toward its center, changing the color of the water to green. It's still beautiful, but not with the same beauty that it once had.

Riverside Geyser is always a favorite of ours. Situated on the bank of the Firehole River, it's one of the most picturesque geysers in the national park. It's eruptions, spaced about 5-1/2 to 6-1/2 hours apart, last about 20 minutes. If you look closely at the above photos, you'll see a rainbow in the mist.

Daisy was our last geyser of the day. After that, we enjoyed supper at the Old Faithful cafeteria, then headed back to our motel in West Yellowstone. The West Entrance Road is often a good place to view elk in the late afternoon and evening. We didn't see any large groups on this night, but a lone female in the river was worth a stop.

Today's video is a little longer than usual (about 5 minutes total), but I wanted to give you the opportunity to experience the sights and sounds of bubbling hot springs and erupting geysers. Hope you find these things as fascinating as Doug and I do.

We left Yellowstone the next day and drove to Estes Park, Colorado, where we spent the last two days of our vacation. More on that next time.
Posted by Linda at To Behold The Beauty at 5:00 AM 12 comments:

Having toured Yellowstone's Lower Loop on August 18, we drove the Upper Loop the next day.

The sign at Soda Butte reads, in part: "This travertine calcium carbonate mound was formed more than a century ago by a hot spring. Only small amounts of hydrothermal water and hydrogen sulfide gas currently flow from this once more-prolific spring."

Lamar Valley is a good place to look for wildlife. On this day, we saw only one pronghorn antelope (sorry, no photos), buffalo, and a lone coyote pictured below:

Apparently, some of the people in the above photo had seen wolves earlier; but the wolves had disappeared during a rain shower. The viewers had been waiting for over an hour for a reappearance. Doug and I joined them for awhile; but, as darkness fell, we gave up and started back to smoky West Yellowstone for the night.

And now, some video clips from this day in Yellowstone:


Geysers and hot springs were the focus of our next day in Yellowstone. But I'll save that for another post.

When we arrived in West Yellowstone the night of August 17, there was ash falling from the sky from two nearby wildfires. The streets were filled with smoke the next morning.

The smoke made breathing a little difficult. Our motel didn't have air conditioning, and we couldn't leave our motel room windows open because of the smoke. Thankfully, it cooled down enough at night to be comfortable in the room. We half expected a knock on the door in the middle of the night to tell us we were being evacuated, but that knock never came.

The roads in Yellowstone National Park form a sort of figure 8, with an upper loop and a lower loop. Today's post features scenes from Yellowstone's Lower Loop, all from August 18.

An osprey nest, located on a pinnacle in the canyon, can be seen from Lookout Point. There was one osprey in the nest, and Doug just happened to catch a second one coming in for a landing. I never even saw that one and was surprised to find Doug's shot of it on the camcorder. But I did catch a series of shots of one of them leaving the nest and flying down the canyon.

Our last destination that day was the Firehole Lake Drive. It's the home of Great Fountain Geyser, and we were hopeful of seeing that one erupt. But it's next eruption was estimated for the wee hours of the morning. We continued on our drive to Firehole Lake, though. Actually, there was no choice since it's a one-way road.

The colorful sky in the last two photos is due in part to sunset and clouds, but smoke from the fires near West Yellowstone also contributed.


Lastly, I've put together some video clips from this day in Yellowstone:


The next day, we toured the Upper Loop; but that will be another post.