Our Last Day in Dubois

August 16th was our fifth and final day in Dubois, Wyoming. On this day, we went for the second scenic drive suggested to us by the woman at the reservation desk at the Longhorn Ranch Resort.

Trail Lake Road is a gravel road which leads past a series of lakes and through the 12,181-acre Whiskey Basin Wildlife Habitat Management Area, home of the largest herd of Bighorn Sheep in the world. Unfortunately, at this time of year, the sheep were up at higher elevations, and we didn't see them. Whiskey Basin is their winter range. A good reason to return for a winter visit.

At the end of the road, at the foothills of the mountains, we found a lovely wooded area which made the perfect site for a picnic lunch and a little reading.

That night, John and Betty (our chariot-racing friends) took us out for supper. We had planned to eat at the Cowboy Cafe, but it was closed that night; so we wound up at the Nostalgia Bistro, where we spent an enjoyable evening of conversation during our meal.

The next day, we left Dubois for a drive through the Tetons and a four-day stay in West Yellowstone, Montana, while touring Yellowstone National Park.

More on that next time.

Celebrating Our 29th Anniversary in Dubois

August 15th was our 29th anniversary. We were spending an extra two days in Dubois, Wyoming because we couldn't get into our Yellowstone lodging until the 17th, but we moved to a different motel in Dubois for the final two days of our stay. This motel was less expensive, had air conditioning, and served a breakfast, which, though not elaborate, was sufficient to avoid the expense of eating that meal in a restaurant.

The new lodging, the Longhorn Ranch Resort, was a combination of an RV park, campground, and lodging facilities, situated beside the Wind River. The first thing we did after checking in was to take a walk through the RV Park, and we were rewarded with sighting a mule deer doe and her fawn across the river.

The lady at the desk at Longhorn Ranch Resort had suggested a couple of scenic drives that we might enjoy. The one we took that day was East Fork Road, on which we were told was a college for trial lawyers. The road passed through some beautiful, but desolate, scenery; and the drive was enjoyable. We never saw anything that looked like any kind of a college, but we learned later that the Gerry Spence Trial Lawyers College looks more like a ranch than like a college.

Following are a couple of photos from that drive along East Fork Road. 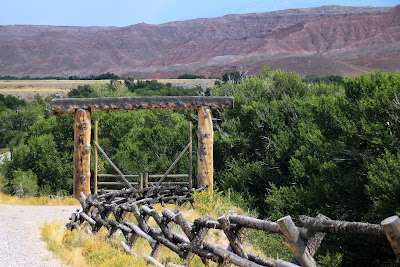 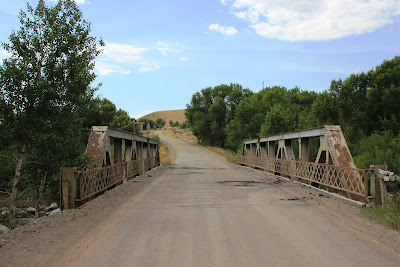 The following five images were taken at the Longhorn Ranch Resort:

The motel rooms are long and go all the way through the building, so that there's a front door and a back door, each with a covered porch area.

That evening, we drove to the Lava Mountain Lodge for our anniversary supper at the restaurant there.

We were the only customers when we first arrived, but there were more by the time we left. And the food was very good.

I'll have a post from our final day in Dubois next time.
Posted by Linda at To Behold The Beauty at 5:00 AM 20 comments:

From Dubois to Tetons

On Sunday, August 14, since the chariot races for that day had been canceled, Doug and I decided to drive over to Grand Teton National Park, about an hour's drive from Dubois. The drive itself is beautiful, and we wound up spending about half a day making that hour's drive.

The area surrounding Dubois had been the scene of a major wildfire, the Lava Mountain Fire, in the weeks before we arrived. It was still burning, although largely contained, by the time we were there; and the firefighters no longer outnumbered the residents.

The route to the Tetons took us past some of the fire's path of destruction.

We took a side trip down Brooks Lake Road, to get a closer view of these mountains:


The next picture may have you cocking your head sideways. I had to lean over a fence and wanted to get as much of the waterfall in the photo as I could, as well as the mountains in the background. My apologies if the picture makes you a little dizzy or gives you a stiff neck.

When we finally reached the Tetons, we found the mountains partially hidden by smoke haze, but I had to include at least one photo of these majestic mountains.

After having supper in Jackson, we drove to the top of Signal Mountain. These birds were everywhere up there.

The main reason for going to the top of Signal Mountain was to get a picture of ourselves there, standing in the same general area where we'd had another picture taken in 1988. Let me just say...the trees weren't the only things that had grown in the intervening 28 years.

Some of you will remember my talking about Betty, the chariot-racing waitress that we met in Dubois, Wyoming in 2012. Well, the reason for the timing of our recent trip West was to see Betty race on August 13. If you haven't read (or don't remember) my previous posts about Betty, you can read about her chariot racing here and here and about her packhorse racing here.

Betty was in the first race on this day, so I had no time to practice my chariot-racing photography. I learned which side of the track Betty would be on and positioned myself near the finish line on that side. The next four photos are of that race. Betty is driving the team with the one white horse. 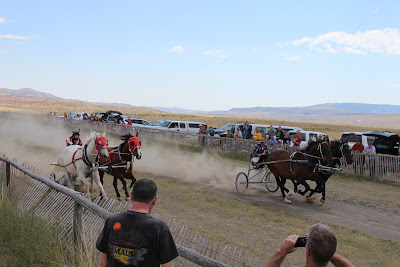 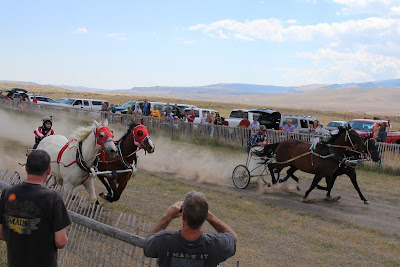 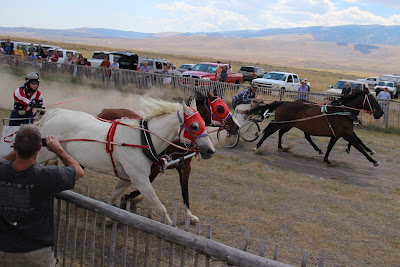 My camera was on the wrong setting during John's race, so the above photo is taken from the video that Doug shot.


Following is a set of five short video clips from this day of racing. The first clip is of Betty's race. The second is of the second race. The third is of John's race. The fourth shows the outriders trying to catch John's team at the end of his race. And the fifth shows the fourth race.

I apologize for the shakiness on a couple of these clips. Doug had zoomed way in, and it's hard to keep the image steady at full zoom. If you can get past the first few seconds of the clips, though, it settles down.

In the years since we first met Betty, we've stayed in touch and even reconnected once in Dubois. But we'd never really had an opportunity to sit down and talk with her and had never met John. This time, though, the four of us found time to go out for supper together and get better acquainted. That was even more special than seeing John and Betty race.

Thanks for supper, John and Betty. Your friendship has enriched our lives.

The Old-Fashioned Western Chariot Horse races were held on August 13, in Dubois, Wyoming, at the Dubois Scenic Overlook Chariot Track. Now, lest your anticipation of seeing pictures and video of the races themselves peak prematurely, I need to tell you that today's post is preliminary to the actual racing. My purpose in this post is to try to give you a feel of the the atmosphere of the event.

First, I must explain how the town's name came about and correct your pronunciation of it.

According to the Dubois website, settlers originally filed with the US Postal Service to name their post office “Neversweat,” due to the area’s dry climate. This request was denied, and the Postal Service instead endowed the first post office there with the name “Dubois,” after a popular Idaho senator (who happened to be on the Postal Service committee). But the residents amended the pronunciation to "DEW-boyz," with the emphasis on the first syllable.

Now, back to the scene of the chariot races. The track is located on a plateau midway up the steep gravel road leading to the top of the Dubois Scenic Overlook. The views from the top are stunning.

The peak to the right side of the above picture, in the background, is the top of the scenic overlook.

As race time drew near, contestants, spectators, officials, and outriders (who are there to help if a team gets away from its driver or someone needs assistance), began to gather. In the picture below, you can see the announcer's booth at the top of the stairs, and the concession stand below it.


In the next shot, the lady in the pink hat is the timer for the teams racing on the north side of the track. Chatting with her is the photographer for the local newspaper, who was kind enough to give me some valuable tips for photographing the races.

As you can see, the track, fencing, and buildings are definitely rustic.

Each race pits two racers against each other, although I understand that some tracks may race three chariots at a time. Each chariot is pulled by two horses, driven by a single driver.

Calcutta betting is part of this sport of chariot racing. I'd never seen this done before and was confused by it. As I understand it, bids are taken for each of the two contestants prior to their race. It works like an auction, with the contestant being "sold" to the highest bidder. If his contestant wins, the winning bidder get his bid back plus the amount bid on the losing contestant. At least, I think that's how it works. Someone from the chariot-racing circuit may need to correct me.

As race time drew nearer, spectator vehicles (mostly pickup trucks) began to line up along both sides of the track. It seemed that most people knew each other, and there was great camaraderie among them. Of course, there were a few, like us, who were seeing chariot racing for the first time.

Lastly, I'm including a YouTube video, prepared by the American Quarter Horse Association. The video provides some history of the sport and includes a few video clips from the 2016 World Champion Cutter and Chariot Racing Association (WCCCRA) Championships, held last March.


Next time...pictures and video from the Dubois races.
Posted by Linda at To Behold The Beauty at 7:00 AM 12 comments: