The school dance was underway, but little Amy, afflicted with warts all over her face, was left sitting alone along the wall, with no dance partner. Across the room was young Alex, whose wooden eye had netted him several refusals from the young ladies he had asked to dance. Looking over at Amy, who appeared as forlorn as himself, Alex summoned the courage to try once again to find a girl to dance with him.

Timid and self-conscious because of his wooden eye, he approached Amy. "Would you like to dance?" he asked.

Amy, with her facial warts, was thrilled to be asked. "Would I! Would I!" she cried.

Stunned, Alex blurted out, "Wart Face! Wart Face!"
Posted by Linda at To Behold The Beauty at 10:09 PM 9 comments:

I'm not sure how sunken living rooms came into being or why. Our experience with them has been a 23-year-long one, since buying this ranch-style house in 1989. 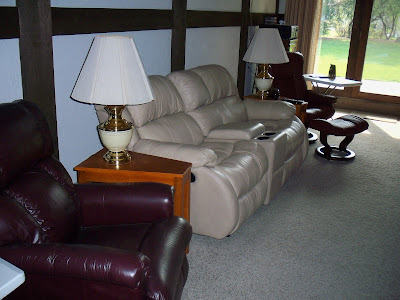 The photo above shows part of our sunken living room. It's a long, narrow room, which widens out at the far end, accommodating a fireplace and an entrance into the dining room.

It has always been a challenge for older family members or physically challenged friends to have to step down seven inches into the living room and then back up the same seven inches to exit the room. My 90-year-old aunt spent the last month of her life here, about 12 years ago, and it was a real challenge to get her in and out of the living room.

And, now, Doug and I ARE older family members.

A few weeks ago, I was carrying something from the living room to the kitchen; and the toe of my Birkenstock sandal caught on the edge of the wooden floor of the entryway, which I now refer to as "the landing."

That incident evoked a confession from Doug that he had taken a similar tumble a couple of months earlier.

But, even before we became officially old, we had reason to question the wisdom of sinking the floor of any room of a house seven inches below the rest of the house. About 10 years after we moved in, during heavy rains on semi-frozen ground, water seeped into the living room at the corners of the room where the low floor joined the higher floors.

But that wasn't to be. This time, the interval between water incidents was only two years. Last May, after heavy rains for three days in a row, the water again came in. 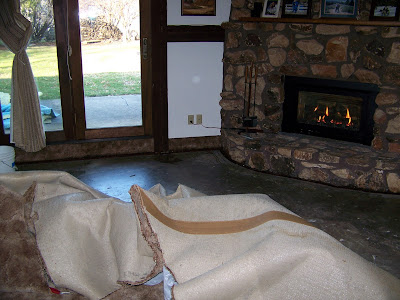 Drying the carpet after the last water damage

We spent the entire summer talking with contractors about solutions and eventually settled on one to do the job. But he was busy with bigger projects and didn't get to our problem before the cold weather arrived, so the outside work had to be delayed until spring.

Knowing that there was a good likelihood of more water problems in the spring, combined with the tumbles we had each taken, we decided to have the sunken living room filled in with concrete.

That work was done yesterday. 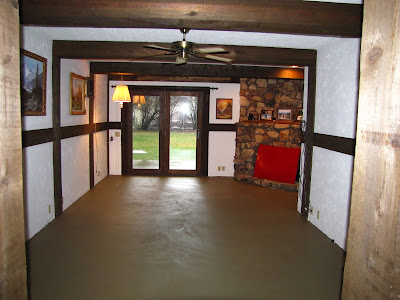 After 23 years of stepping down when entering the living room, it's hard to retrain ourselves. It feels so weird to be able to walk on a level floor from one room to another. But the biggest surprise is the humidity in the house right now as the moisture in the concrete is steaming up our windows and making our house feel like a sauna.

Years ago, there was a restaurant in town that featured a soup and salad bar; and on most days, the soup and salad bar featured a cabbage soup that was just delicious. The wife of a co-worker came up with a recipe that was intended to duplicate that of the restaurant, and it was pretty close. Over the years, I've tweaked it a bit until it's become a favorite cold-weather comfort food for Doug and me.

We're currently in the midst of a cold snap, which prompted us to get a container of this soup out of the freezer and enjoy some for lunch today.

Here's the recipe. If you try it, I'd love to hear whether you liked it.

Brown ground beef and onion together. Drain off fat. Mix all ingredients in large pot. I use a 6-quart slow cooker and let it simmer for 4-5 hours on low. I've also used a 6-quart stock pot, in which case I bring it to a boil, then lower the heat and let it simmer for an hour or two. I know you'd be more tempted if I had taken a picture of the finished product. You'll just have to trust me on this. This is a delicious soup. As the old TV commercial used to say: "Try it; you'll like it."

Email ThisBlogThis!Share to TwitterShare to FacebookShare to Pinterest
Labels: Recipes

Several months ago, I posted a video clip of my great-nephew, Carson, playing a piece for his piano recital. If you missed that, you can see that post here. In fact, as his proud great-aunt, I think you should go listen to it again even if you did see it before. (Smiles)

Well, we attended another of Carson's piano recitals the week before Christmas. He played three pieces at this latest recital, but I've edited part of it out to keep the video short enough to hold your interest while still showing off this 10-year-old's ability.

Enjoy!
Posted by Linda at To Behold The Beauty at 4:35 PM 14 comments:

I don't know whether it's due to the holidays or a lack of inspiration or just plain laziness on my part, but you may have noticed that I've been neglecting the blog lately. So sorry to all of you faithful folks who come here looking for some little tidbit on a regular basis.

I'm still not feeling inspired, but I thought I'd share a photograph from a couple of months ago. We had gone to visit Doug's brother in a neighboring state and were enjoying a ride through the countryside after going out to supper together. 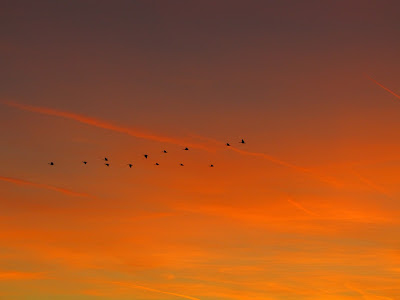 The sunset was beautiful in its own right, but the flock of geese just added another dimension.