These dragonfly photos were taken almost three weeks ago and are just now finding their way to the blog.

Each summer, it gets harder to maintain the house and yard. We're aging, you know, as difficult as it is to accept that fact. So, this summer, we're getting some much-needed maintenance taken care of...things that would need to be done if we stayed here but that would also help sell the house if we decide to go that direction.

Among other things, we're getting a new front door. The house is nearly 45 years old, and the entry door has never been replaced. The wood in the side panels has cracked enough that we can see daylight through the cracks. So it's time. We've ordered the door and have hired an installer. So it's not in yet, but here's a picture of it from the online catalog: 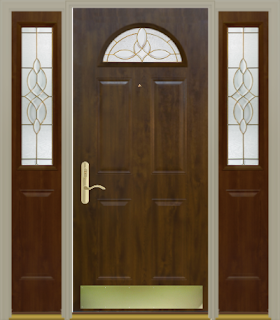 When it arrives and is installed, I'll post before and after pictures.

We're also having a new roof put on the house and adding an improved venting system for the attic, along with a few other improvements and maintenance items. It's been time consuming and sometimes stressful as we line up professionals to take care of these things, but we're seeing the proverbial light at the end of the tunnel.

As a friend likes to say, we just hope the light at the end of the tunnel isn't an oncoming train.
Posted by Linda at To Behold The Beauty at 11:25 AM 14 comments:

More Dragonflies and a Kingfisher

Another visit to Ouabache State Park provided a few more dragonfly photos and a couple of shots of a belted kingfisher. Enjoy.