On March 16, Doug and I and our friends, Pat and Adrian, visited the Ark Encounter in Williamstown, Kentucky, to view and tour the full-scale replica of Noah's Ark that has been built there. 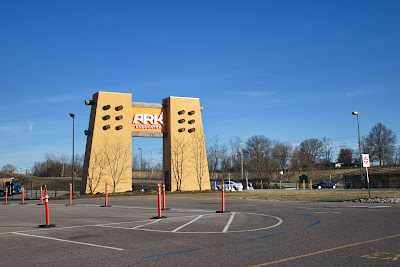 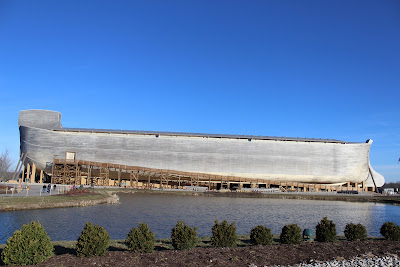 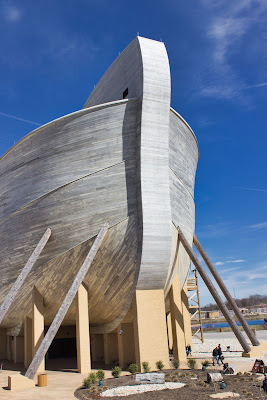 One of the exhibits in the Ark is entitled "Fairy Tale Ark." It provides a word of caution regarding how the story of Noah and the Ark is presented to children. With cartoon-like characters and with no mention of sin or past and future judgment, we could be unwittingly teaching children to disbelieve the Bible. 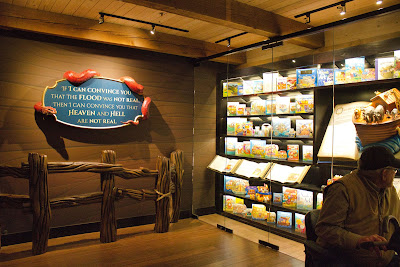 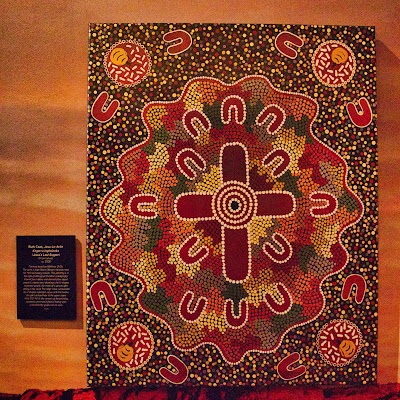 The photo above is of an oil painting depicting the Last Supper in the style of Aboriginal Christian Iconography. The "U" shapes represent people, the mark of a person after sitting in the sand. The cross in the center represents Jesus.

In Noah's day, the world had become so wicked and sin so rampant that God decided to send a flood to destroy "both man and beast, creeping thing, and birds of the air...But Noah found grace in the eyes of the Lord." God gave explicit instructions to Noah regarding the building of an ark that would save Noah, his wife, their three sons, and their sons' wives, in addition to pairs of every kind of bird, animal, and creeping thing on earth.

A Holy God must punish sin, but He always offers a way of escape. As there was only one way to be saved in Noah's day, so there is only one way of salvation today, and that's through faith in God's own Son, Jesus. Jesus temporarily set aside the heavenly glory He had with His Father, to come to earth in human form and offer Himself as the only sacrifice that could redeem sinners. Anyone who places his trust in Jesus and His substitutionary death for us on the cross will be saved from the future judgment of eternity in hell.

We were blessed with sunshine when we went to see Doug's brother, Dennis, on Saturday. Even with the sunshine, the temperature was too cold to spend much time outside, especially with Dennis in his wheelchair; but I snapped a few photos through the car's windows.

The first image is of an American Sycamore tree. To me, these trees seem most beautiful in the winter.


Next is a cemetery in which most of the trees grow slanted to the right. That phenomenon intrigues me. I can only assume that there is a strong predominant wind from the left.


The first two images were taken before we picked Dennis up at his apartment. Since it's much easier for Dennis to get in and out of the front seat, I shot the next photos from the back seat as we took a drive after having lunch at Arlene's Truck Stop.

You'll just have to trust me on the beautiful images I saw but didn't capture. Shooting from a moving car, especially when the subject is also moving, can be tricky. There were some beautiful hawks, the pictures of which exist only in my mind.