On Friday, February 12, our last day in Florida, the temperature rose to about 70 degrees (21 Celsius). The wind was blowing, though, causing us to seek shelter behind some rocks at Fred Howard Beach. As you can see by the following pictures, others had the same idea.

The first picture was taken half an hour or so after we'd arrived at the beach, when we realized the beach area was shrinking as the tide was coming in. 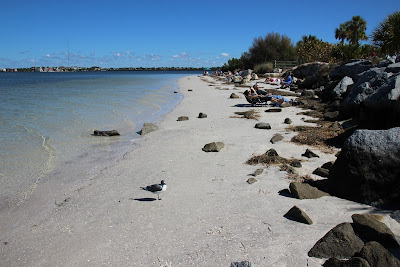 The following picture was taken about 20 minutes later, and you can see that the beach area was shrinking fast. 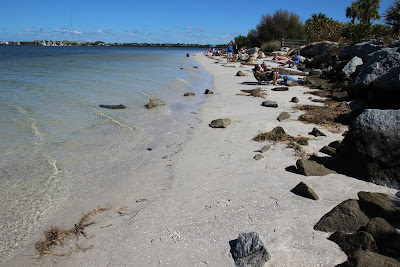 It wasn't long before we had to find another place to sit and read. The tide was coming in there, too, of course; but it was a broader expanse of beach, giving us a better chance of being able to stay longer without getting our feet wet. 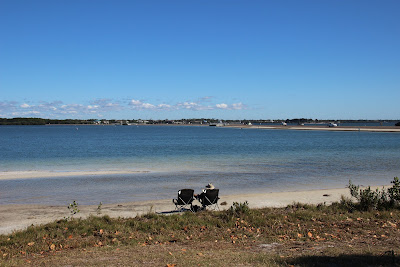 Because there was more shore at our new location, there were more shore birds to distract me from my reading.

The next three pictures feature a Marbled Godwit, which was a new one for me. A gorgeous bird. 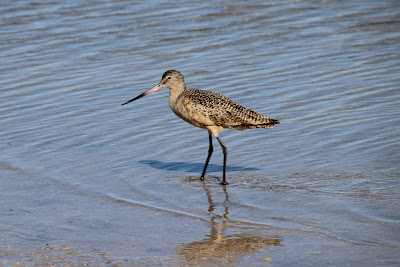 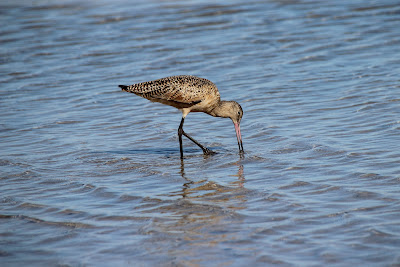 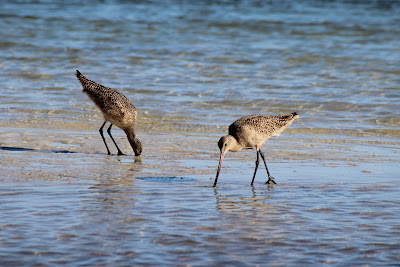 I included this last picture so you could see how deeply one of the Marbled Gotwits was plunging its bill into the mud in search of food. I read that they sometimes probe so deeply that the whole head is under water.

It was a fun day at the beach, the best of the whole week. The incoming tide never reached us, leaving plenty of shallow water to entice several shore birds to feed in the shallows. And the Marbled Godwits were the icing on the cake.

Email ThisBlogThis!Share to TwitterShare to FacebookShare to Pinterest
Labels: Florida 2016

As I mentioned in my previous post, we included several visits to the beach during our one week in Florida earlier this month. I love these winter trips to Florida for a number of reasons, not the least of which is the sunshine. But the most fun for me is seeing the variety of birds at the beach.

The Boat-tailed Grackle is as much of a pest to folks at the beach as the gulls are. I include the following picture to try to show the rich color of the male of the species.


Great Blue Herons are not as commonly seen on the crowded beaches as the Grackles and Gulls, but the one pictured in the next two photos seemed quite comfortable among the many folks enjoying the Florida sunshine. It wasn't until I downloaded the pictures, though, that I realized this one was missing its right foot. 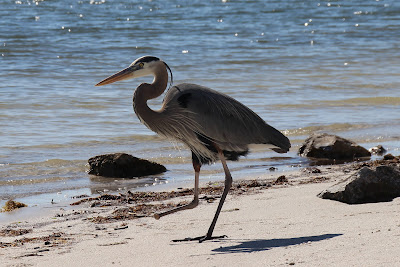 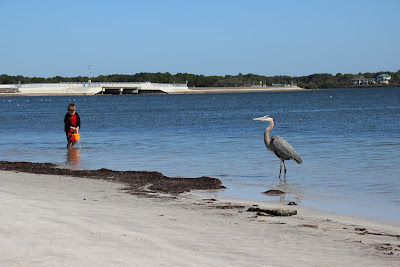 I thought a heron with one foot might be unusual enough that there might be some information about this one on the internet. I did find a story about a heron that was missing its right foot and was fed daily by a couple who lived nearby. They said they'd been feeding it for 11 years, and the story was 10 years old. So I think it's unlikely that the bird I saw is the same one. If you're interested, you can click here to read that story.

Among the shore birds that we saw on this particular day was one that I'd seen for the first time when we went to Florida two years ago, a Reddish Egret. This one was moving rapidly through the shallows, in search of some tasty tidbit, and didn't exactly pose for its picture.


Before leaving the beach that day, we checked another spot where we have seen some interesting shore birds in the past. The tide was in, though, limiting the shallow water in that spot and apparently keeping the birds from foraging for food there. But we did see a Tricolored Heron, sitting among the bushes, apparently waiting for better foraging conditions to return.

And here's one last shot of one of the spots we frequent on our beach days.

Posted by Linda at To Behold The Beauty at 9:11 PM 8 comments:

Email ThisBlogThis!Share to TwitterShare to FacebookShare to Pinterest
Labels: Florida 2016

A Cool Day at the Beach

We went to Florida for a week last week; and it helped to get me motivated to update the blog, which has been lying dormant for almost two months now. There's nothing like a little Florida sunshine to help overcome the winter blahs.

The primary reason for going on this trip was to attend a conference at Word of Life Conference Center in Hudson, Florida. Erwin Lutzer was the speaker last week, and we always enjoy hearing him. The conference schedule allowed plenty of time to enjoy the beaches, though. And we did.

On Monday, the 8th, we went to Fred Howard County Park. The tide was in, and water was covering the island beach spot where we had planned to seek shelter from the strong wind that was blowing that day. So we spent the afternoon on the mainland part of the park, tucked behind some shrubs growing along the shoreline.


The weather was cool during our week in Florida, but much warmer than it would have been at home. The sunshine is much more important to me than the temperature anyway. Sunshine just makes everything better. And we don't get much of it during the winter months where we live in Indiana.

So we just donned our sweatshirts and went to the beach at every opportunity. More photos to come.

I'll be around to visit your blogs as soon as I can.