When I graduated from high school in 1963, I went to work for a large insurance company, which was just about the only place in town that would hire someone just out of school, with no previous work experience. Because of that, a large number of their employees were young single women in their late teens and early twenties. It made for a work environment that was more like a girls' day out.

The pay wasn't great, but the lunches in the company cafeteria were subsidized. I remember that, when our state implemented a tax on food, the first penny of tax came into play at a food cost of 25 cents. So I always made it a point to keep the cost of my cafeteria lunch to 24 cents or less. For that, I could have an entree, dessert, and beverage. We would usually eat our lunches as fast as we could, then retreat to the large lobby to join other employees in a fast game of Euchre, a card game that enjoys great popularity in our area of the country.

The cafeteria would also be open at break time, offering fresh fruit and ice cream. I rarely partook of that, though, because there were "candy drawers" located in the individual departments. There were no vending machines, but individual employees would take it on themselves to stock a desk drawer with candy bars, which could be purchased by other employees on the honor system for a minimal price.

With that sort of working environment, friendships easily grew between employees. I don't remember which of these fellow employees first conceived of the idea of a joint vacation at a dude ranch, but the idea took hold and quickly became a reality.

The location chosen was the Gay El Rancho, located in Gaylord, Michigan, not exactly the first place one thinks of when considering dude ranch locations; but it worked for six young women who didn't make very much money. There were five of us from one department at the insurance company, plus one friend that the other four knew from their Catholic Youth Organization. 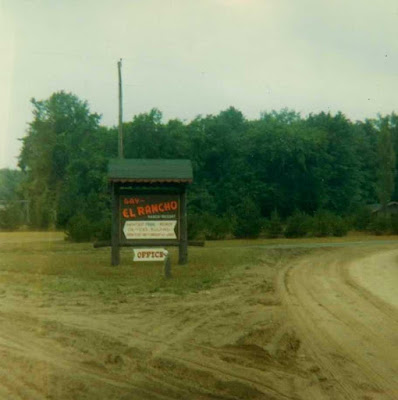 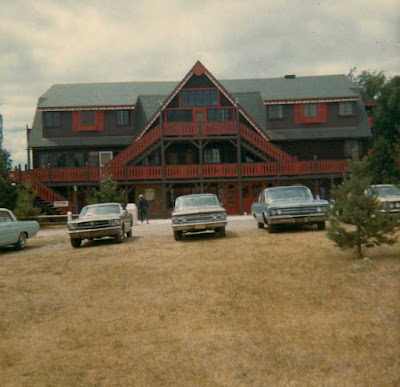 The six of us stayed in two adjoining rooms on the first floor of the Thunderbird Lodge. One room had two double beds, and the other had two single bunk beds. There was a large lobby area outside our rooms where we could sit in the evenings and read or write letters. 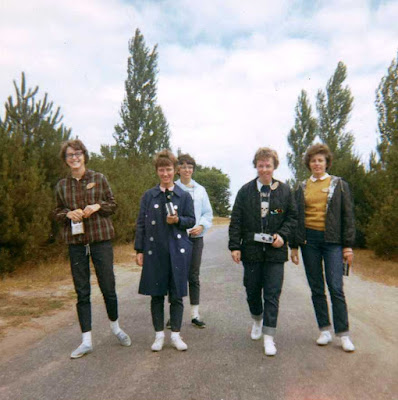 Carole, Dar, Kathy, Mary, and Judy walking from the lodge to the Ox Yoke Building. Dar was the only one who didn't work in our department and the only one that I didn't know before the trip. 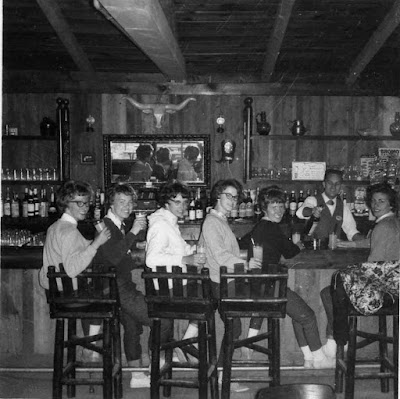 Linda, Mary, Kathy, Carole, Dar, "Uncle Frank", and Judy at the bar.
(Notice that five of us managed to sit on three bar stools.)

Judy was the only one of us old enough to legally consume alcohol, but "Uncle Frank," the bartender, obliged us younger ones with "Shirley Temple" drinks. At first, we were confused when Frank offered Judy an alcoholic drink but not the rest of us. Then we realized that the name tag Judy had been given was slightly different than ours, signalling that she was "of age." 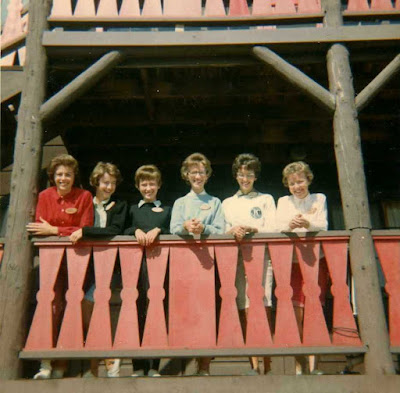 Judy, Carole, Dar, Linda, Kathy, and Mary on the second-floor balcony of the Thunderbird Lodge 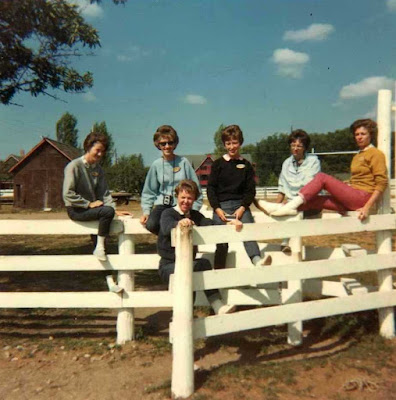 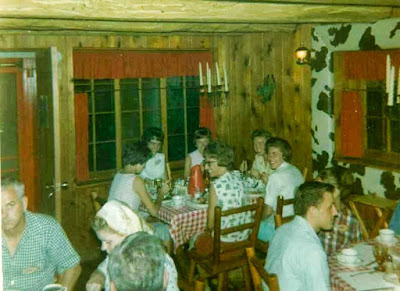 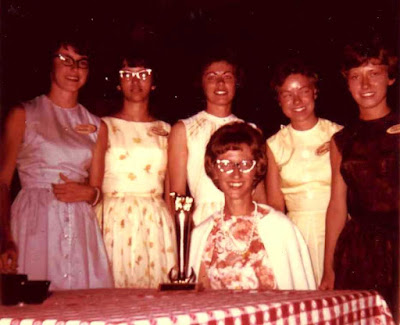 Carole, Kathy, Judy, Mary, and Dar surrounding Linda and her Ride-Off trophy.
Times were different then, weren't they? We're all wearing dresses for the occasion of "Awards Night." And don't you love the eyeglasses? 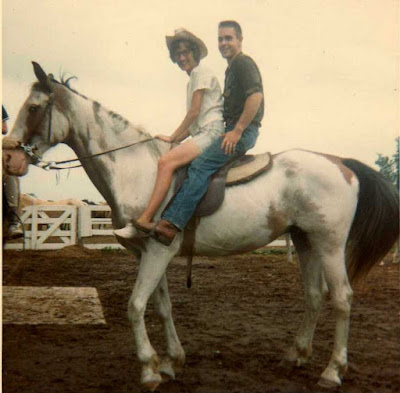 Linda and Dale (one of the guys on staff) on Lucky on our last day at Gay El Rancho.

Lucky was my horse for the week because he was the only one they used a flat saddle on, and I was the only guest who was willing to ride in a flat saddle. He was a big, not-especially-handsome brute, but I loved him. I kind of liked Dale, too, if we're being honest.

The six of us had such a great time on this vacation, that we took another dude ranch vacation together the following year...but to a different ranch. But that's fodder for another post.

Posted by Linda at To Behold The Beauty at 7:53 PM