On Friday, October 12, 2018, we spent the day touring Canyonlands National Park, Island in the Sky district. We have visited and documented this park before, so I won't try to include pictures of everything we saw, just some that are representative of the park.

A short hike leads to Mesa Arch, a must-see feature of Canyonlands. You may have seen photos of this arch on calendars or even as a Windows wallpaper, but those photos were always taken at just the right moment of a sunrise. It would be a glorious sight to see. Unfortunately, sunrise occurs way to early for me to make it to Mesa Arch to experience it. 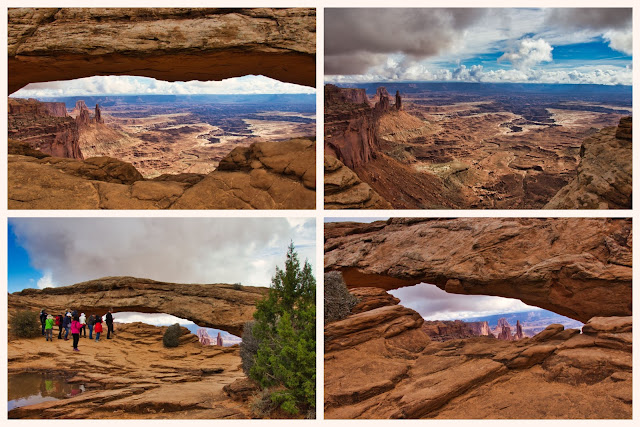 The above collage shows Mesa Arch and the view through it, as well as the view from a scenic overlook a few feet to the side of the arch. (If you want to see these individual images in their full size, just click on the collage. That will take you to the album where they're stored.)

The next day, we toured Canyonlands National Park, the Needles District. Stay tuned.
Posted by Linda at To Behold The Beauty at 9:11 PM 14 comments:

Continuing the saga of last October's Last Hurrah trip, we awoke to rain in Moab, Utah on the morning of October 11. We decided to go ahead with our plans to visit Arches National Park. We'd been there several times before, so getting more photos wasn't critical. We reasoned that, if the rain continued, we would just enjoy a drive-through tour and then maybe find a place to park where we could enjoy the view and read for awhile. We bought some sandwiches at a local convenience store for a lunch to be eaten later at the national park.

By the time we arrived at the park, the rain had let up considerably, and we began hopping in and out of the car during the light drizzle to get a few photos.

There are a number of people under the North Window, to the left. If you can find them in the photo, you'll get some perspective on the size of the arch.

That speck on the upper right of Turret Arch is a woman who decided to climb to the top. See the picture below for proof. 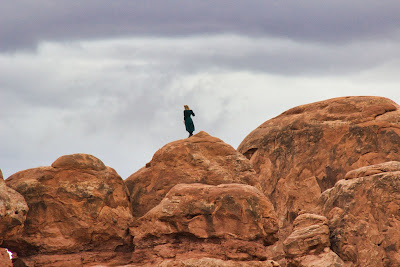 The top left photo in the following collage shows the entrance to Sand Dune Arch, between large sandstone "fins." Under that photo is a picture of the arch that is found in this cave-like setting. And, on the right, is the view when exiting. 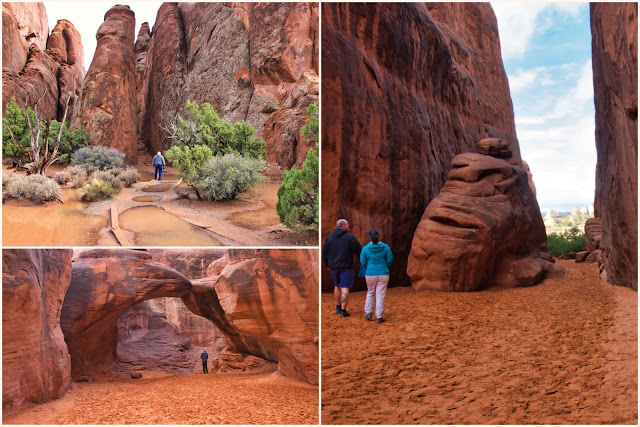 One thing that makes Sandstone Arch so special is that those tall sandstone fins keep the spot in shade almost all day. Arches National Park is usually a very hot place to visit. This time, it was so cool that we needed winter jackets. I loved it! Anyway, on those hot, hot days, the shade available at Sandstone Arch is truly a blessing.


When we exited Sandstone Arch, we found that the last of the rain had left; and the late-afternoon sun was lighting the rock formation directly opposite the entrance to Sandstone Arch.

As we were walking back to our car, Doug saw another path through more sandstone fins and just had to follow it. 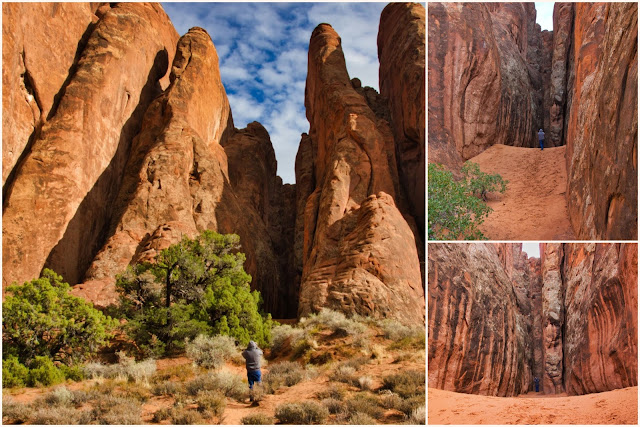 A return visit to Canyonlands National Park, Island in the Sky, was on our agenda for the next day. More on that next time.

It was raining in Vernal, Utah when we got up on the morning of October 10, 2018; and it looked as if the rain had come to stay for the day. We had planned to stay another day in Vernal but talked it over and decided that, if we could get a room in Moab, our next scheduled stop, we’d just go ahead and check out of the Dinosaur Inn and Suites in Vernal and move on to Moab for the next three nights. I found a room at the Super 8 in Moab and booked it.

We chose to take U. S. Highway 191 to Moab. Our GPS wanted to take us to Colorado on U. S. 40, then down Highway 139. It might have been shorter, but we liked the looks of 191 better. It was a beautiful drive, going up to 9,000 feet in elevation, with snow on the mountains around us but none on the road we were traveling. 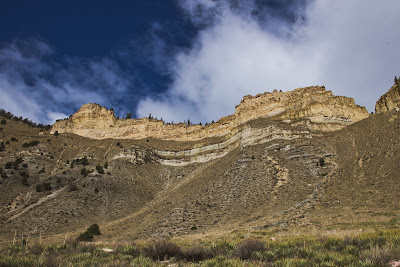 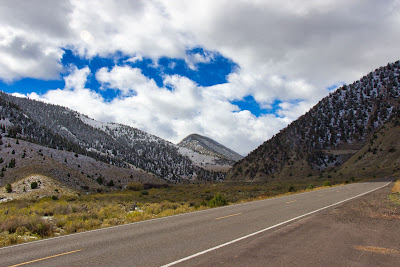 We arrived at Moab about 4 PM, and went out to do some sightseeing as soon as we'd gotten checked into our lodging. It was 22 miles to Dead Horse Point State Park, and we ran the risk that the fading afternoon light would make photography challenging; but we still managed to get several nice shots. 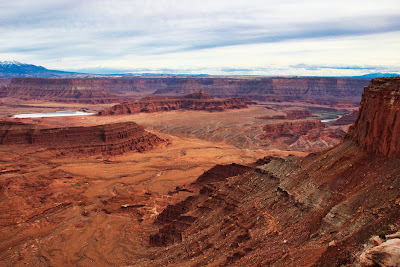 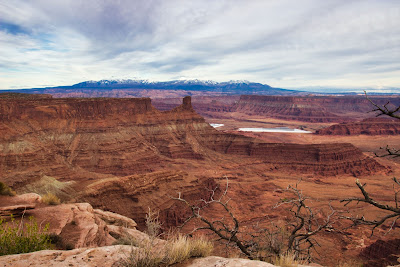 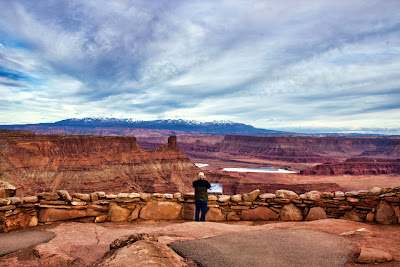 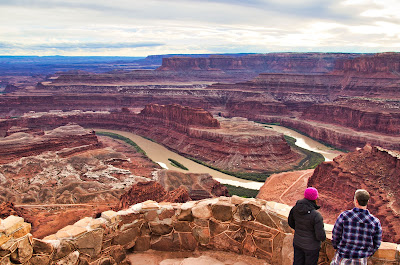 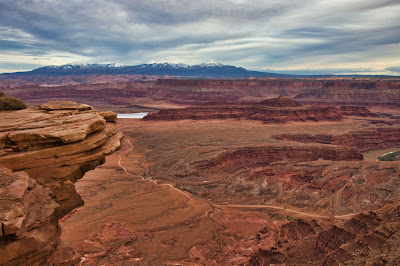 The light was fading fast by the time we left Dead Horse Point State Park, but Doug wanted to drive the three more miles to Canyonlands "Island in the Sky" National Park. There, we strolled out onto the rocks by the visitor center to take a few pictures of that view.


Then the setting sun caught our attention, and we dilly dallied around the area until it put on it’s final spectacle, taking some shots of its dying glory. 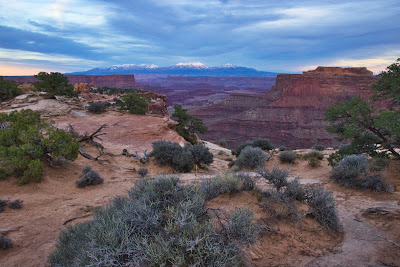 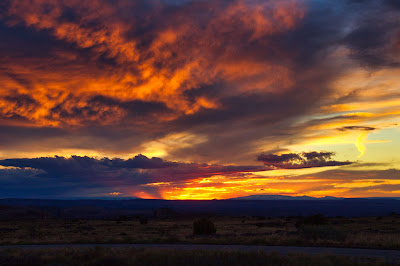 We returned to Canyonlands a couple of days later, in the daylight. But that's another post for another day.
Posted by Linda at To Behold The Beauty at 10:09 AM 14 comments:

Well, THAT was a long break, wasn't it? I just lost my blogging momentum there for awhile, even though I was enjoying sharing our "Last Hurrah" western adventure with you. But I'm back now, to begin sharing the last half of our three-week vacation to some of our western states last October.

Our lodging for this part of our trip was at the Dinosaur Inn & Suites in Vernal, Utah, and was, hands down, the best room, best breakfast, and best rates encountered at any other stop. I highly recommend this facility for anyone looking for a place to stay in Vernal.

Vernal was chosen for its proximity to Dinosaur National Monument, which was the focus of our activity on October 9, 2018.

Entering Dinosaur National Monument, the first stop is the Quarry Exhibit Hall. It's an enclosed exhibit, built around a rock face in which approximately 1,500 dinosaur bones are embedded and preserved where they were found.
Dinosaur National Monument encompasses more than 210,000 acres of rugged, colorful, and beautiful landscape. We were there on a perfect day, when the sunshine highlighted the gorgeous colors in the rocks. 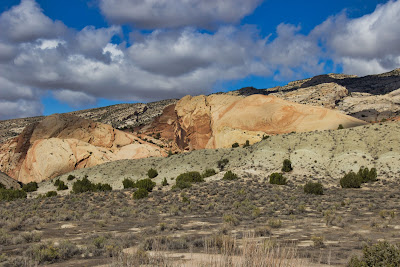 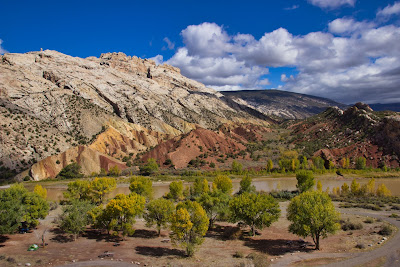 Another fun place to visit within the National Monument is the Josie Morris homestead. Josie was a woman alone who, at the age of 40, established her home in this remote area in the 1900s. She wanted to be self-sufficient, raise some livestock, and grow some produce. Here, she found the water and other conditions she needed to survive. She built her cabin and lived there until she died in 1964, at the age of 90. 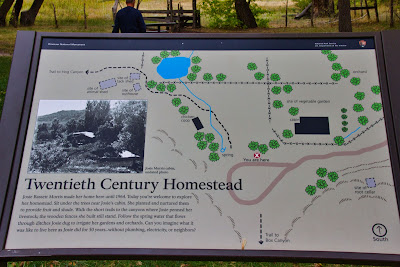 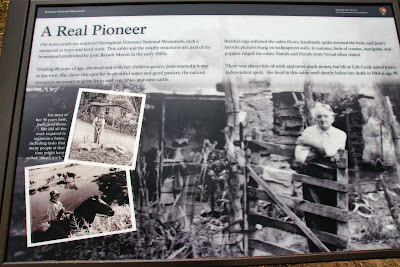 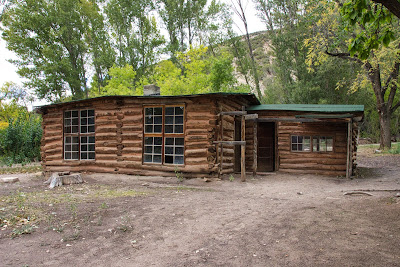 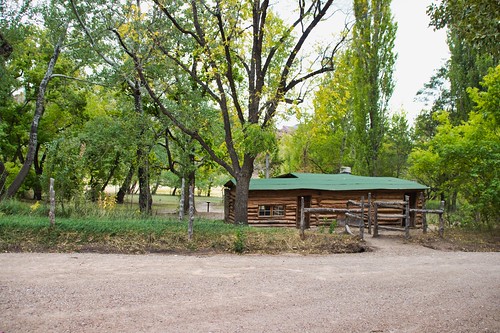 A path from Josie's cabin led to one of two box canyons where she pastured her cattle. She was able to easily corral them with a simple fence over the narrow opening to the canyon.

There were also a number of places where petroglyphs could be viewed on the rock faces in the National Monument. Petroglyphs are forms of rock art left by ancient peoples who created them by removing part of the rock surface.

I'm including the following image of one such rock wall and have added arrows pointing out the many petroglyphs I found in just this small area. Most are lizards. One appears to be a man. Our attention was drawn to this wall by the very clear representation of a large lizard in the middle of the photo. Then we began spotting several others in the same area. 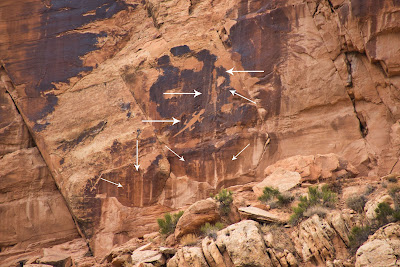 The next day, we drove to Moab, Utah, where we visited Dead Horse Point State Park, another amazingly beautiful place, that afternoon. But more on that next time.
Posted by Linda at To Behold The Beauty at 9:42 PM 14 comments: