The Biblical account of the hours leading up to Jesus' crucifixion tells us of His disciple, Peter's, declaration of loyalty to Jesus, even unto death. In response, Jesus told Peter that Peter would deny Him that very night. And Peter did. Three times he denied even knowing Jesus. And then Jesus, on trial for His life, turned and looked at Peter. Peter remembered his bold boast and utter failure...and wept.

The following musical video is a song called "He's Alive," written and sung by Don Francisco, from the perspective of Peter on that first Easter morning.

Although Peter is the main figure throughout the song, the final chorus should ring in the heart of every believer.

Wishing each of you a blessed Easter.

This cartoon of “B.C.,” by syndicated cartoonist Johnny Hart, says it so well.


But God commendeth his love toward us, in that, while we were yet sinners, Christ died for us. Much more then, being now justified by his blood, we shall be saved from wrath through him. For if, when we were enemies, we were reconciled to God by the death of his Son, much more, being reconciled, we shall be saved by his life. (Romans 5:8-10)

All we like sheep have gone astray; we have turned every one to his own way; and the LORD hath laid﻿﻿ on him the iniquity of us all. (Isaiah 53:6)

Email ThisBlogThis!Share to TwitterShare to FacebookShare to Pinterest
Labels: Faith

Spring officially arrived on March 20. This is what our backyard looked like yesterday... 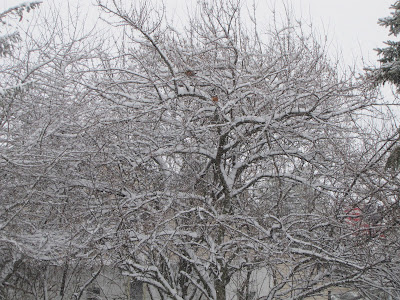 The crab apple tree, with a couple of robins looking for any of last year's fruit that might remain. 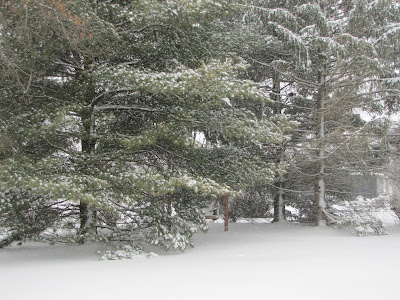 The snow is all but gone today, and the rest of the week is promising more springlike weather.

Posted by Linda at To Behold The Beauty at 9:24 PM 9 comments:

Chariot Racing...Alive and Well in the Western U. S.

Some of you may remember my chariot racing post from last October. In it, I introduced you to slender, soft-spoken Betty, a waitress in a cafe in Dubois, Wyoming, who races chariots for fun. 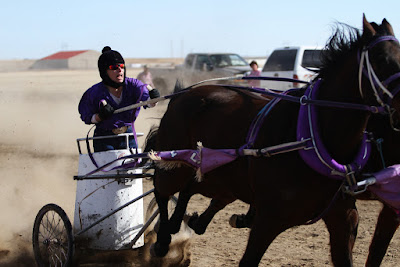 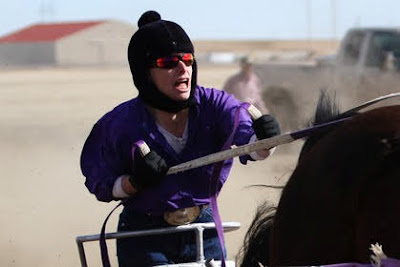 Here, you can see that belt buckle that sparked our initial conversation with Betty last fall.﻿ 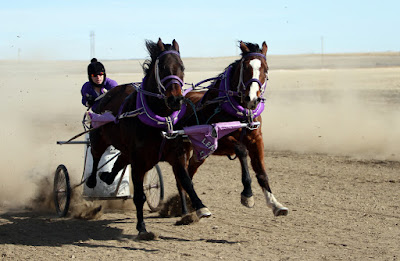 Betty placed 2nd in the 3rd division in the Wyoming championships, winning another buckle, horse blankets, and a traveling trophy. 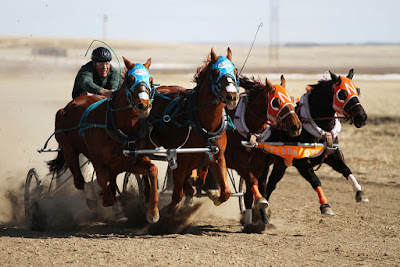 This just shows how close two teams can be when racing against each other at speeds approaching 50 miles per hour.﻿ 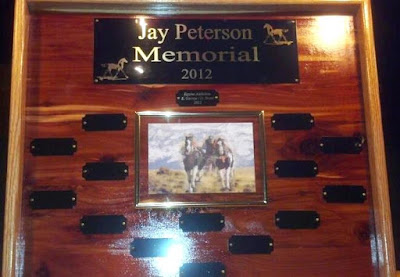 The traveling trophy that went home with Betty this year.﻿ 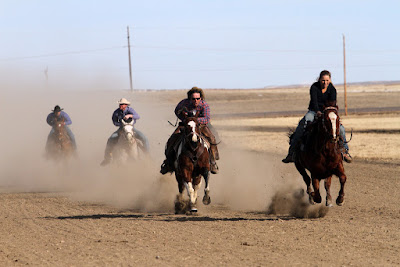 When the chariot races were finished, a pony race was thrown in for dessert.

Like most chariot races, the Wyoming State Championship Chariot Races were held for charity, raising money for the Shriner's organization, to help three local children. There's no profit in the sport for those who participate. They do it for the love of it and for charity.

Betty says, "It's a rush coming out of those gates." I can imagine. Quarter Horses can leap out of the starting gates at nearly full speed. It would be a rush just to realize you were still in the chariot.

The 2013 World Championship Chariot Races are currently underway in Ogden, Utah. John and Betty weren't able to participate this year because John was needed at his workplace. These days, no one can take a good job for granted.

Credit for the photos in this post goes to Christian Hansen, contributor for the Gillette News Record.

Posted by Linda at To Behold The Beauty at 6:51 PM 9 comments:

Some of the Photos from the Box

Hi! Remember me? I want to apologize to anyone who has noticed my absence from blogging recently. I'd been trying very hard to be consistent about my posting over the last several months. Then I came down with a cold a couple of weeks ago and lost my momentum. The cold is all but gone by now, but I've still had a hard time getting back into regular posting.

When Doug and his siblings sat down to go through the box of old family photos mentioned in my last post, Doug really didn't want any of the pictures for himself. He was content to let his brother and sister take what they wanted. But, out of their rejects, I salvaged a few photographs of my sweet hubby as a child. 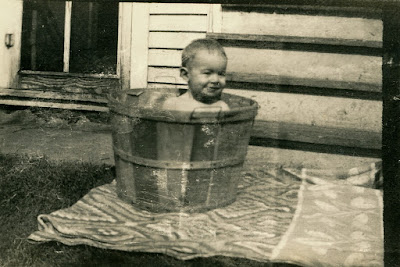 At first, I thought this was a picture of Doug in a washtub; but, on closer inspection, it looks like he's in a laundry basket. 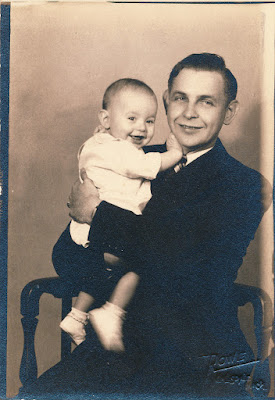 Doug and his dad 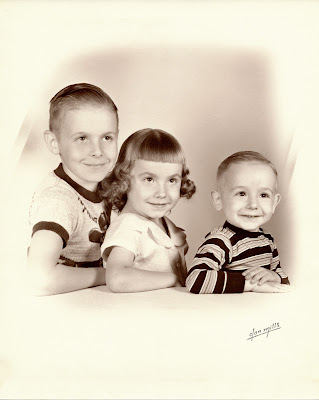 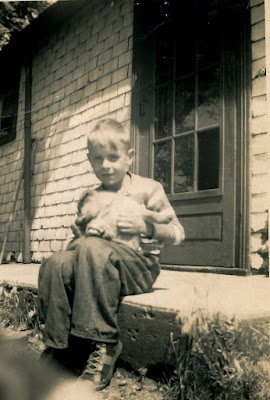 Doug with new puppy, Pal. Doug still remembers Pal as the best dog a boy ever had. 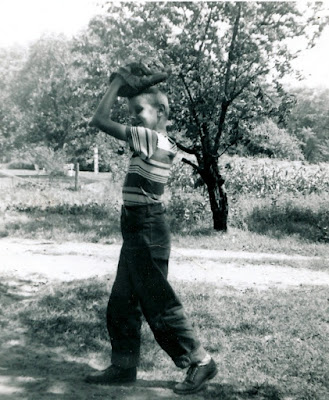 Doug's dad was a baseball player who nearly made it to the pros, so it was natural for Doug to take up the sport himself. 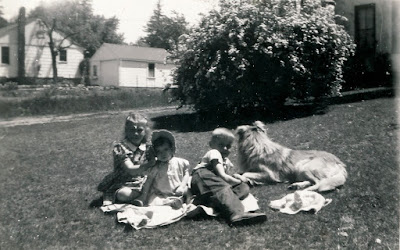 A neighbor girl, Doug's sister Linda, and Doug with their dog. 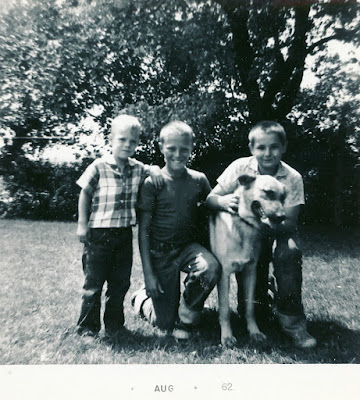 This is a picture of Doug's brother, Dennis (on the right, with his arms around his dog, King), and a couple of Dennis' friends. 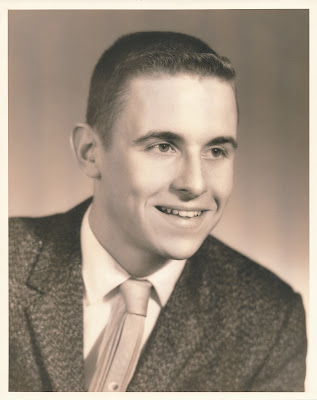 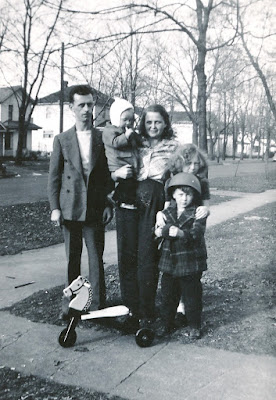 I have no idea who these people are, but I just thought that little scooter was so sweet.

There is always an element of sadness to a funeral because someone who was special to you in some way is now absent from this life. But funerals also serve the purpose of bringing old friends and distant family together, sometimes after many years of separation.

Lil's funeral was last Wednesday. The weather forecast was not good for the day of the visitation or for the funeral the next day, so Doug and I decided to drive to the small town where Doug's brother, Dennis, lives...about an hour away from us and about a half hour from the smaller town where the funeral was to be...and spend the night in a hotel there. That way, Dennis could ride with us to the funeral home.

We had freezing rain Tuesday morning. By the time we left home in the early afternoon, all the trees and bushes and fences were coated with a heavy layer of ice. Fortunately, though, the roads were okay.

When we left the hotel to go out for an early supper with Dennis, the snow had begun falling. The wet snow quickly decorated everything it touched with it's beautiful whiteness. But it kept many people at home who might otherwise have come to the visitation time.

By Wednesday, the day of the funeral, there was an accumulation of four or five inches of snow on the ground; the temperature was a degree above freezing; the wind was calm; and the snow was still falling. The final service at the graveside couldn't have had a more beautiful setting.

I didn't think it would be appropriate to whip my camera out and start taking pictures at the cemetery, but I did snap a few through the windshield on the way to the funeral home that morning. 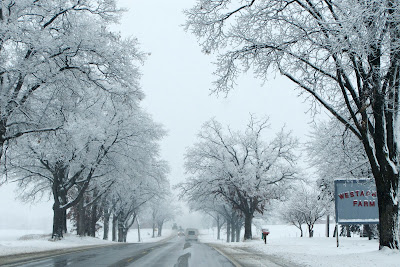 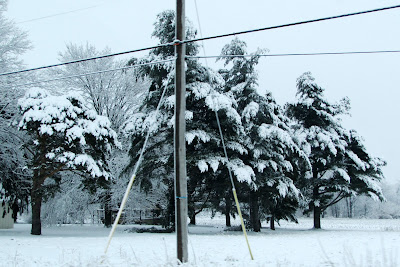 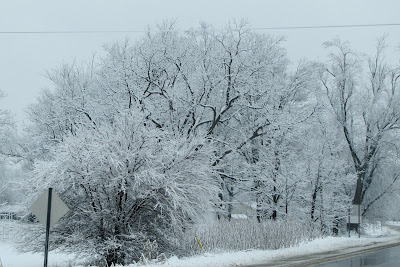 Doug's sister, Linda, and her husband, Larry, live about 750 miles (1200 km) from us, so we rarely see them. They had come back to their hometown for Lil's funeral and were staying there for several days. So we picked up Dennis yesterday and met Linda and Larry at a restaurant for supper. 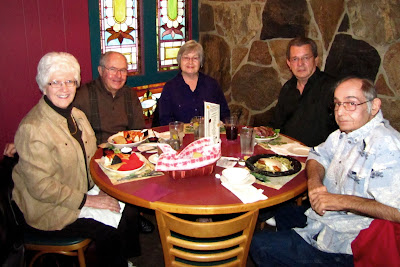 Left to right: Me, Doug, Linda, Larry, and Dennis﻿


After our meal, we went back to the hotel where Linda and Larry were staying; and the three siblings went through a box of old family photographs and memorabilia that had been stored in Lil's house until a few months ago, when she moved into an assisted living facility. 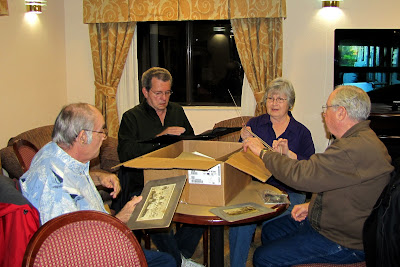 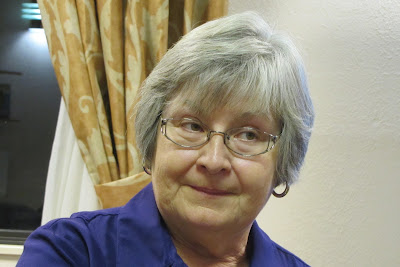 Linda
Doug, Linda, and Dennis hadn't all been together since their dad's death in 2001; and, even then, there hadn't been much "together" time. I'm glad we were able to spend those few hours together last night. Who knows if or when there will be another opportunity. Family is special. Sometimes we forget that.