Who remembers Robert F. Kennedy, whose brother, John F. Kennedy, was the 35th President of the United States?

Frequently referred to simply as RFK or Bobby, Robert Kennedy served as Attorney General of the United States in his brother's administration. He was campaigning for President himself, when he was assassinated on June 6, 1968. 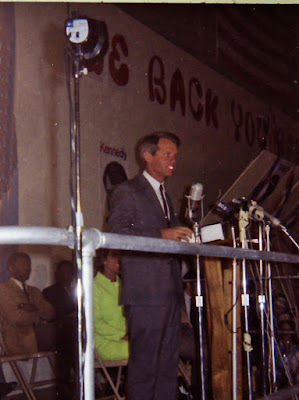 That Presidential campaign brought him to Indiana during the spring of 1968, as he campaigned here prior to the Indiana primary election.These photos were taken during a campaign stop in Fort Wayne, Indiana. 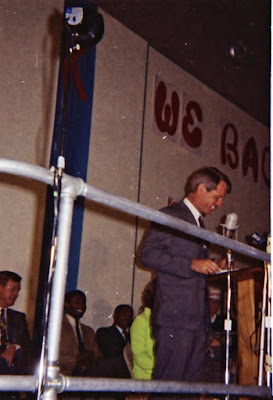 His manner was invariably self-deprecatory. And when he spoke, it was always tentatively, modestly and with deadpan jokes that turned on himself. In Fort Wayne, in the homestretch of the campaign, he asked a sidewalk rally whether the city was going to vote for him. Otherwise, he said he and Ethel and their ten children would have to go on welfare. "It'll be less expensive just to send us to the White House," he went on. "We'll arrange it so that all ten kids won't be there at once, and we won't need to expand the place. I'll send some of them away to school, and I'll make one of them Attorney General."
(Source: http://www.newsweek.com/how-bobby-kennedy-won-68-indiana-primary-207076)

The photos in this post were taken 47 years ago, in 1968. I don't know where the original prints have gotten to, but I came across the negatives last week and scanned them into the computer. They clearly show their age, with the dust and scratches; but they are still rather special.

A Few More Photos from Our November, 2015, Trip to the Smokies

After Doug's hike to Andrews Bald on Wednesday, the 4th of November, he developed a couple of nasty blisters. So we avoided any serious hiking for the remaining two days of our time in the Smokies. But we still got out into the National Park and enjoyed its beauty.

Mountain Views & More from the Smokies

Here are a few more photos from our early November visit to the Smokies. 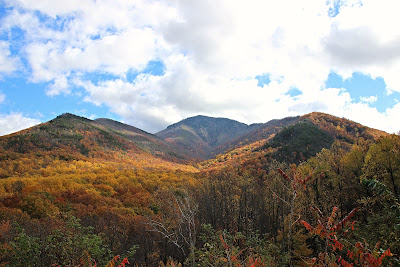 Campbell Overlook
One of Doug's favorite destinations in the Smokies is Andrews Bald. The hike to the bald is 1.8 miles (2.9 kilometers) most of which is downhill, on a rough and rocky and sometimes wet trail, which means that the return hike is the equal distance...uphill...on that same rough and rocky and sometimes wet trail. Uphill hiking is hard enough when you're fresh and the trail is smooth, but it's exhausting when the trail is rough and you're already tired from the downhill hike.

The last time we hiked to Andrews Bald was in 2002, and we've aged since then.

Doug has always remembered the beauty of Andrews Bald and has wanted to see it again. I knew that it would be too much of a challenge for my feet and legs, but I encouraged him to go ahead and do it if he wanted to. I would be perfectly fine waiting for him in the minivan. I had books, pillows, blankets, food, water, and a great view with which to occupy myself for the three hours or so that it would take him to hike to the bald and back. So he did.

This was my view from the car while I waited in the Clingmans Dome parking lot for Doug's return from his hike.
Andrews Bald offers amazing views of the surrounding mountains. Doug didn't take any still shots while he was there, but I took this one off the video that he shot: 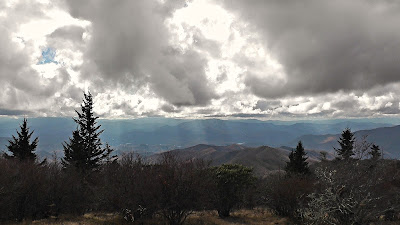 View from Andrews Bald
Doug returned from his hike just shy of three hours later. He was glad he'd done it, but he didn't think he wanted to do it again. He was feeling those thirteen years that had passed since we last hiked that trail.
From there, we drove on down the North Carolina side of the mountains, enjoying more beautiful mountain views. 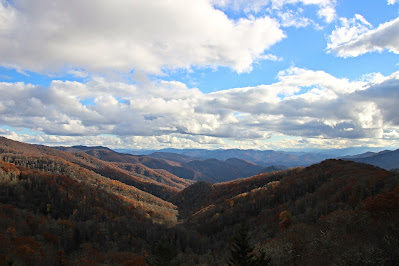 When we reached the Ocanaluftee Visitor Center, there was a herd of elk grazing in the meadow. 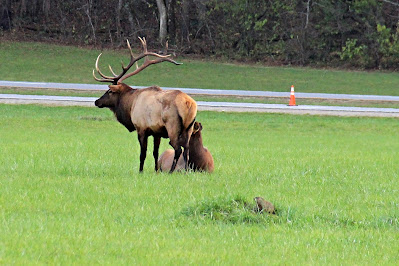 On Doug's and my first trip to the Smoky Mountains in May, 1990, we missed our turn that would have taken us into Pigeon Forge and wound up at the Douglas Dam overlook mentioned in the previous post. Doug's frustration over the missed turn evaporated as he absorbed the peace and tranquility of the of the area around the dam.

Then, as we found our way back toward Pigeon Forge, we drove past this old building, which looked to us like an old church or schoolhouse: 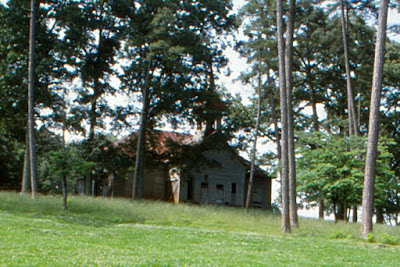 Old Church or School on Douglas Dam Road - May, 1990
Since we visit Douglas Dam on almost every trip to the Smokies, we've watched that old building slowly deteriorate. This year, I asked Doug to stop so I could take a current photo of it. 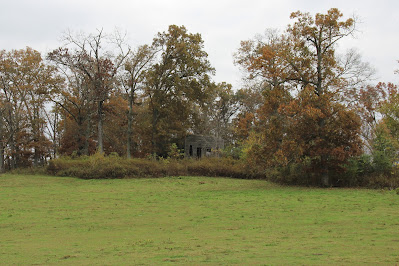 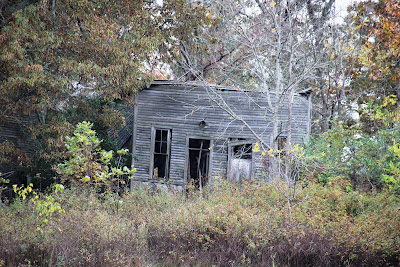 A closer look at the old building - November, 2015
The building is falling down, and the property is becoming overgrown. Whenever we pass it, we wonder what that building was in its prime and can't help thinking what a beautiful setting it would be for a house.
Posted by Linda at To Behold The Beauty at 10:03 PM 7 comments:

Continuing with our visit to the Great Smoky Mountains National Park during the first week of November, this post will touch on two more of our favorite places in the area.
The first three photos were taken along Little River Trail, which has become one of our favorite trails in the park, not only because of its beauty but, increasingly, because it's one of the easiest hikes in the park. 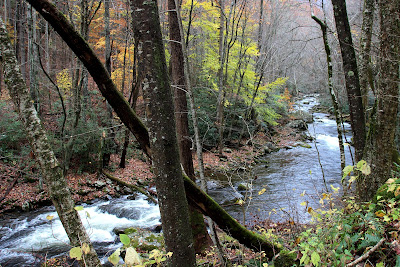 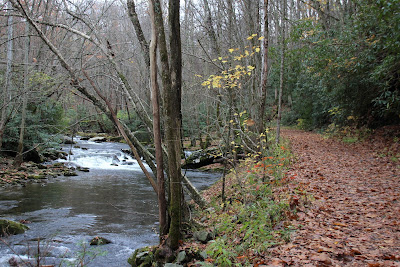 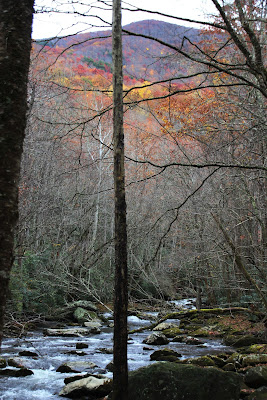 The trees were pretty bare along the river, but look at that burst of color on the mountainside!
The next four images are from the overlooks at Douglas Dam, which is not inside the National Park but which we've come to love for its beauty and peacefulness. 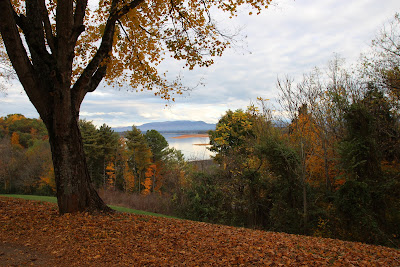 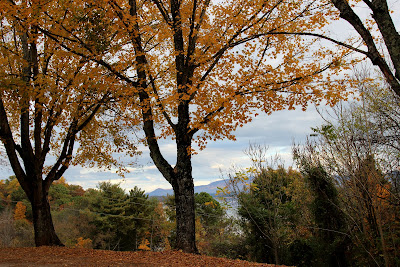 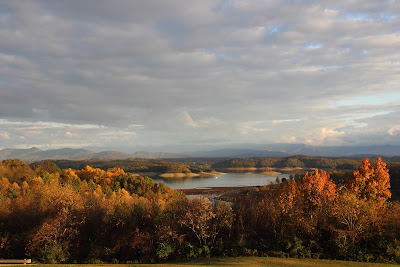 More to come from this beautiful area in future posts.

A November Visit to the Smokies

As most of you know, Doug and I love the Smoky Mountains in Tennessee. We try to get there twice a year, usually once in the spring and again in the fall. Our spring trip this year occurred during my one-year blogging break, so the photos from that trip haven't yet made it to the blog. They might still find their way here one of these days. But, for now, I'll share some shots captured last week, during our fall visit there.
On Monday, we awoke to drizzle and fog. It wasn't raining hard, though, so we took off to visit a few of our favorite haunts in the national park. 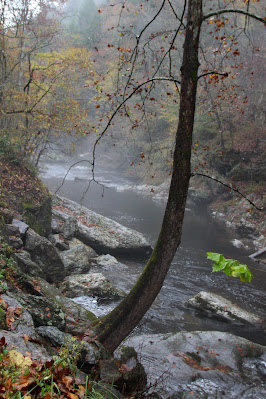 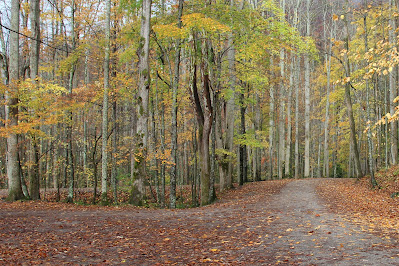 This bridge marks the beginning of the trail. 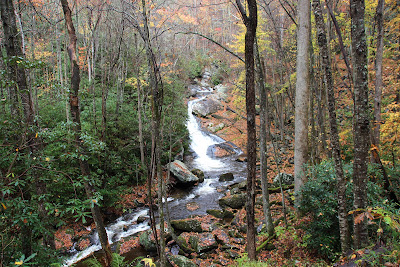 Lynn Camp Prong Falls is a short walk up the trail. 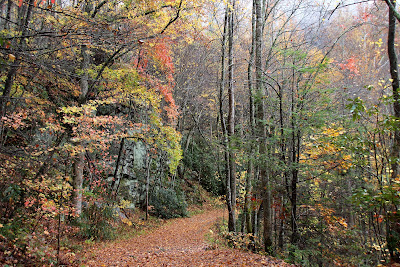 This is a view near where we turned back to return to our vehicle.

After our hike on Middle Prong Trail, we took a drive up Newfound Gap Road to the overlook for Chimney tops. The fog grew thicker the higher up the mountain we traveled. 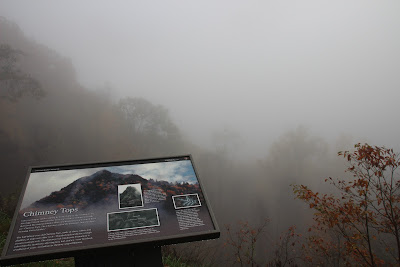 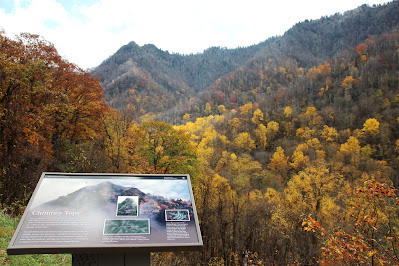 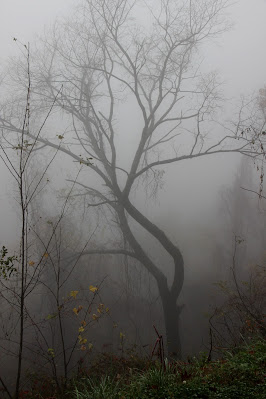 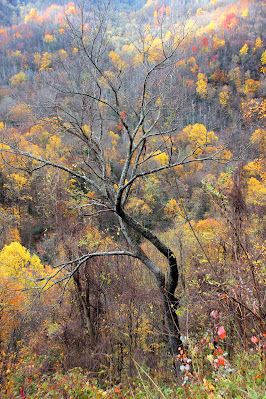 Here's one more picture from the foggy day: 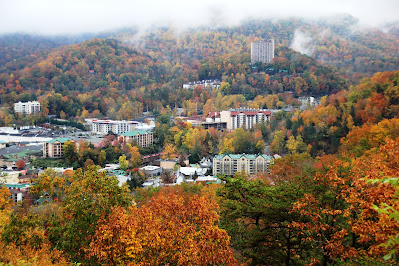 More from the Smokies soon.

On our way home from that October 12, visit to Ouabache State Park, we had the privilege of seeing this beautiful sunset. 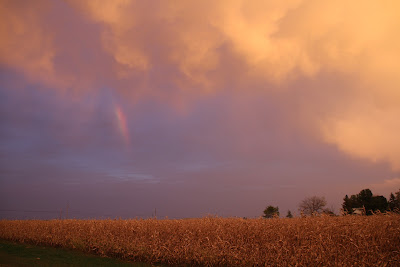 A rainbow seems to be dropping from the clouds, almost like the finger of a tornado. 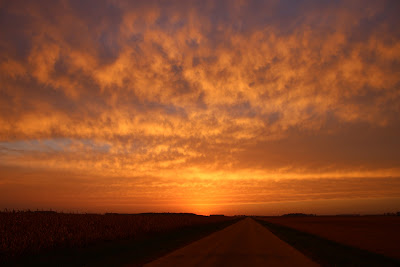 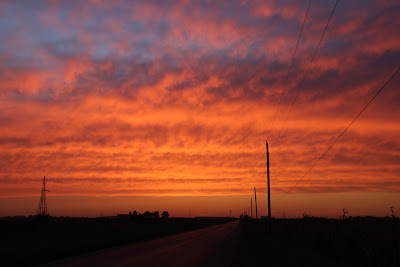 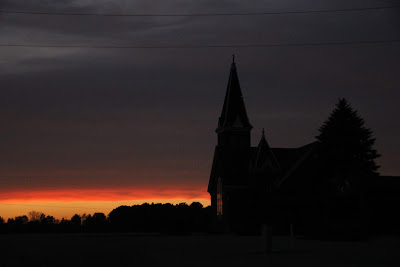 The brilliantly colored sky was growing dark by the time we reached this church, but I still liked the silhouette against the last remnants of the sunset.
Posted by Linda at To Behold The Beauty at 12:00 AM 10 comments: