After visiting the James River visitor's center, our next stop on the Blue Ridge Parkway was Fallingwater Cascades. The information I had was that it was 3/10 mile to the first cascade, with an option to walk further to more cascades if desired. Well, the temperature by then was in the eighties, and the walk was steep. And then, when we reached the cascade, it was hard to get any pictures of it because of the way the trail lay in relation to it and the underbrush between the two. 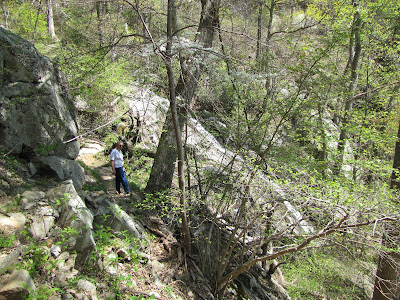 Doug on the trail to Fallingwater Cascades (You can see the cascades in the background.) 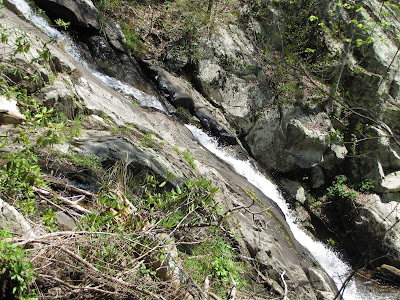 A closer look at Fallingwater Cascades 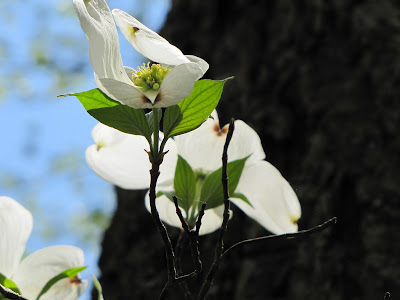 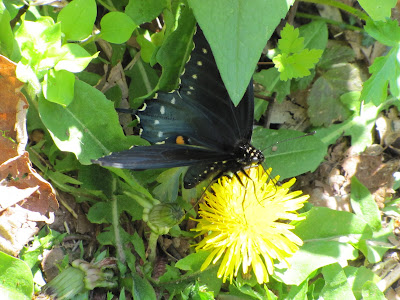 Butterfly on dandelion along the Fallingwater Cascades trail

After the hot hike back to our vehicle and its welcome air conditioning, we drove to Peaks of Otter Lodge, where we parked, walked around a bit, and rested for a few minutes on a bench by the lake. 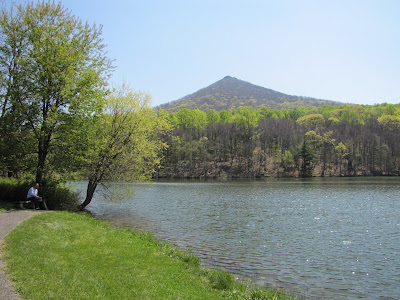 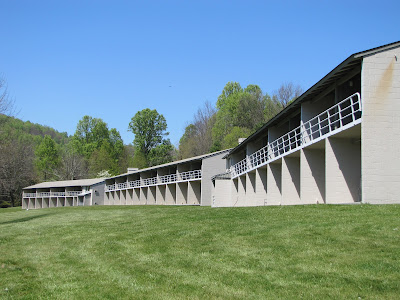 
We had wanted to spend a night at Peaks of Otter Lodge, but the timing just didn't work out. It was mid-afternoon when we arrived there, and we decided to drive on a little further before stopping for the night. We wound up staying in Roanoke, Virginia; and it was ninety degrees Fahrenheit when we arrived in town. That's way to hot for April 16th.

After a day spent driving the Skyline Drive in Shenandoah National Park in Virginia, followed by three days driving the Blue Ridge Parkway in Virginia and North Carolina, we spent a week in the Smoky Mountains of Tennessee, in a rented cabin that had neither cell phone service nor internet service.

But I'm back now and will be trying to catch up on blog reading and commenting over the next few days. Please be patient with me.

My last post contained some highlights of our trip down Skyline Drive. Today's post will introduce you to the Blue Ridge Parkway.

Though not a national park, the Blue Ridge Parkway is a National Scenic Byway and is the most visited unit in the United States National Park System. Running for 469 miles, mostly along the ridge of the Blue Ridge mountain chain that is part of the Appalachian Mountains, the Blue Ridge Parkway connects Shenandoah National Park in Virginia with Great Smoky Mountains National Park in North Carolina and Tennessee. It's a winding two-lane road, with a maximum speed limit of 45 miles per hour but which is best traveled at a much lower average speed. There are many scenic overlooks, of course; but there are also many opportunities for getting out of your vehicle and exploring the area on foot.

This was our first trip on the Blue Ridge Parkway, and we decided to make it sort of a get-acquainted tour, rather than an in-depth exploration. That was just as well because we were actually traveling the route a little too early in the year. Many of the attractions and facilities had not yet opened for the season. So there was much that we didn't see. But what we did see was pretty impressive. 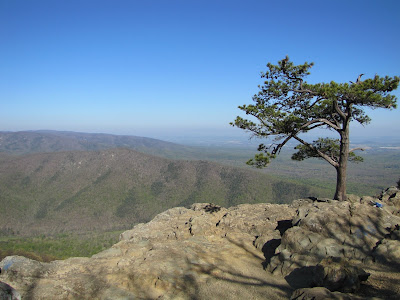 Sitting behind the wheel of a car for extended periods of time just wears Doug out. So we looked for things to do along the way that would allow us to get out and stretch our legs and enjoy the scenery up close and personal. One of those involved a short side trip to Crabtree Falls in Virginia. 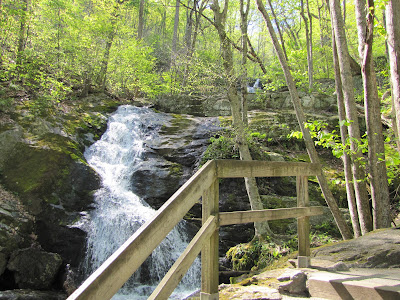 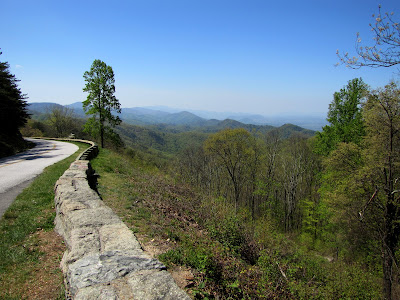 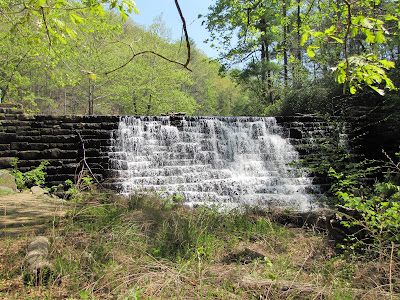 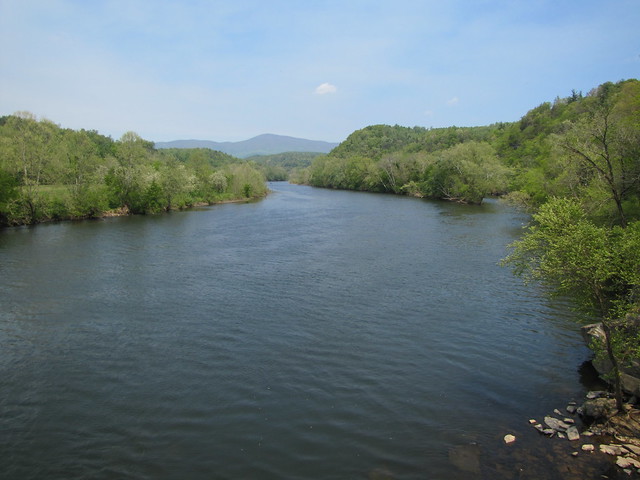 The James River flows from the mountains through Lynchburg and Roanoke to the coast. It's the largest river in Virginia and, historically, one of the state's most important transportation corridors. A restored lock is on display at this site, providing an interesting look into the river's past. 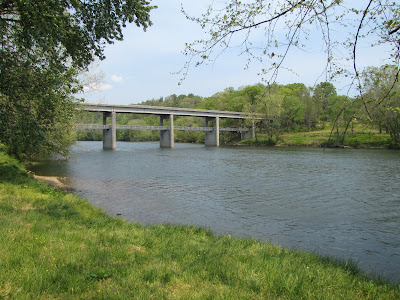 I hope you've enjoyed this introduction to the Blue Ridge Parkway. I'll have more to share in a future post.

Doug and I visited Shenandoah National Park in Virginia today and drove the 105-mile length of the famed Skyline Drive. It is truly a beautiful drive and would be awesome during the fall color season. The air was a bit hazy today, and many of the trees seen on our drive were still totally bare of leaves. Others were just budding. So the views weren't as spectacular as they most likely will be in another couple of weeks. Still, nothing can take away from the beauty of this area. 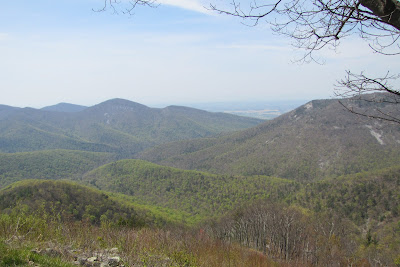 We weren't far into our drive today when we spotted the telltale collection of randomly parked vehicles along the roadside, some with doors still hanging open, which is often the sign of a bear sighting. And so it was today. A mama black bear and her two cubs were foraging among the trees, just down the hill from where a small but growing group of people had gathered to watch. 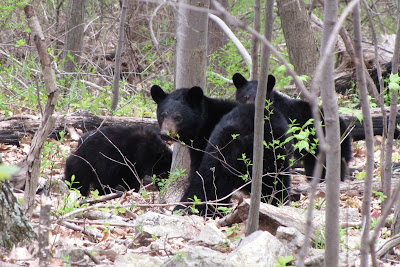 The dogwood trees at some elevations were almost past their blooming period; but, at other elevations, they were in full bloom. 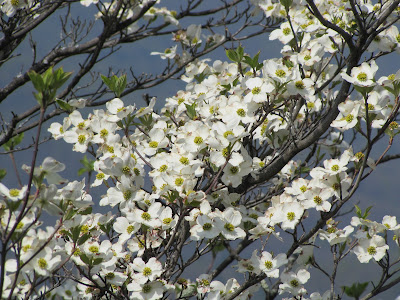 Today is the day which is set aside by Christians to celebrate the resurrection of Jesus, the Lamb of God, the only sacrifice that could pay the penalty for the sins of the world, once and for all.

I'm not feeling very wordy today. (Did I just hear an enthusiastic group cheer?) But I did write a post about Resurrection Sunday last year that you can read here if you have an interest in knowing more about it.

Meanwhile, here are a few more spring photos. These were taken yesterday, in the yard of my brother-in-law's landlady. The first two pictures are of Bleeding Heart flowers; the other two are of a flowering (and fragrant) tree, the identity of which is unknown to me. 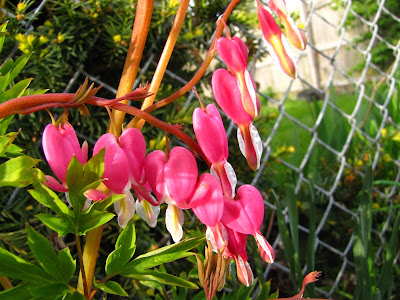 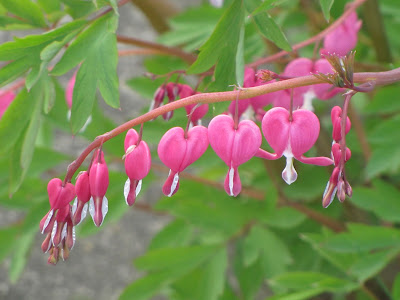 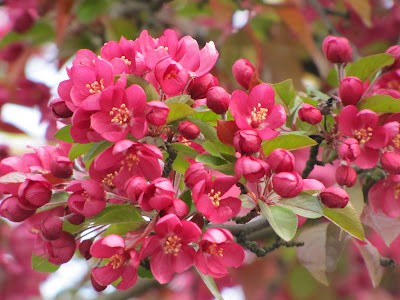 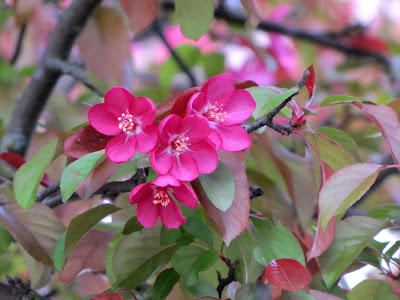 The next day John seeth Jesus coming unto him, and saith, Behold the Lamb of God, which taketh away the sin of the world. (John 1:29)

But God commendeth his love toward us, in that, while we were yet sinners, Christ died for us. (Romans 5:8)

And almost all things are by the law purged with blood; and without shedding of blood is no remission. (Hebrews 9:22)

And as it is appointed unto men once to die, but after this the judgment: So Christ was once offered to bear the sins of many; and unto them that look for him shall he appear the second time without sin unto salvation. (Hebrews 9:27, 28)

Wishing each of you a happy and blessed Easter!

Email ThisBlogThis!Share to TwitterShare to FacebookShare to Pinterest
Labels: Faith 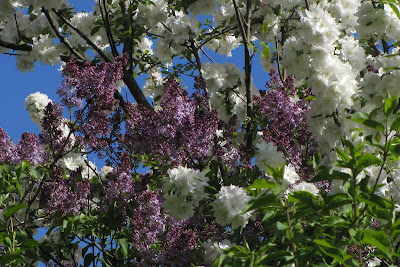 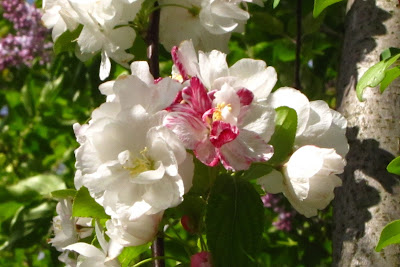 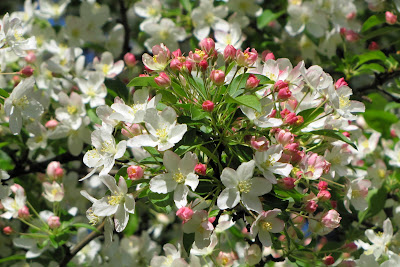 Posted by Linda at To Behold The Beauty at 9:33 PM 8 comments:

Spring is such a beautiful time of the year. Here are a few photos, taken today in our back yard: 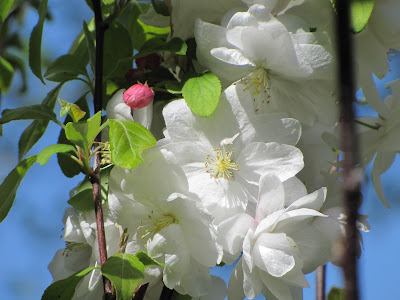 Blossoms and buds on our apple tree 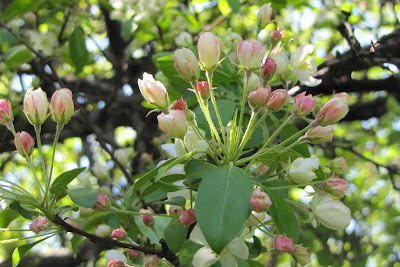 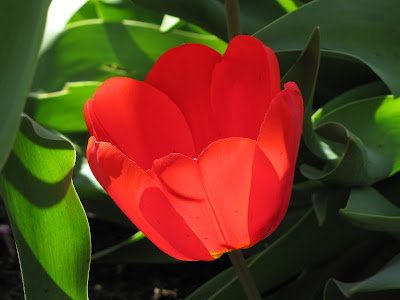 One of our neighbor's tulips