For the last year and a half that we've been traveling to Michigan to visit Doug's brother, we've been driving by this beautiful barn, with a large mural painted on the side. On our last trip, I managed to snap a drive-by picture of it. 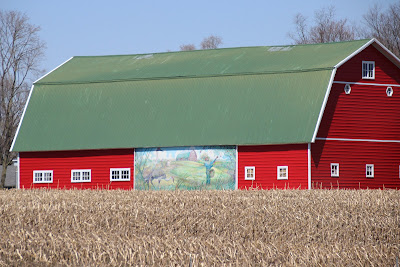 The opportunity to snap a photo from the highway is somewhat limited because of the hill in front of the barn. And then, when the corn is up in the summer, the roof is about all you can see. 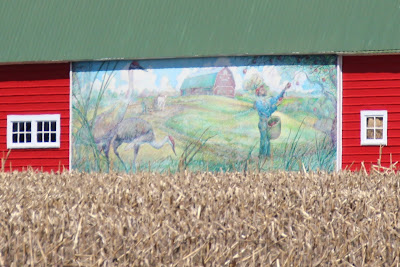 The mural, called "The Heart of Heatherbrook," was completed in 2007, and is supposed to last 10 years without being repainted. Being on the south side of the barn, it is very subject to sun fade and, likely, to a lot of highway pollution.

According to Jan, there are several such murals around the county, all done under the same series of grants. This is regarded as one of the best, if not the best, and most enduring of all.

Jan's website states, "The mural represents the talents of the Battle Creek Society of Artists, working under the leadership of professional muralist, Tony Hendrick, Grand Ledge, Michigan. It is funded by a grant from the Calhoun County Arts & Industry Council."

Jan told me in an email that one of the requirements was that the mural depict local history. There is a lake not too far away where the sandhill cranes spend their summers, hence the sandhill cranes in the foreground. Prisoners from Jackson State Prison, as well as migrant labor, picked fruit when that farm was a thriving fruit farm, hence the man picking fruit.

The barn in the mural is a representation of the very barn on which it appears.

I hope you will go to Jan's website, where you can see photos of this and several other barns and read their stories.

Email ThisBlogThis!Share to TwitterShare to FacebookShare to Pinterest
Labels: Barns

Some Last Video Clips from the Drowned Camcorder

My last post told of the drowning of our video camera when it went into a cold mountain creek with my husband. Doug came out of the ordeal cold and wet but otherwise fine. But the camera was unable to recover.

When I told that story, one of my faithful readers commented that I should have shown some of those video clips that I was able to rescue from the camera's memory card. So I thought that's what I'd do in this post.

The first video clip shows the heron rookery at Douglas Dam. We were shooting across an expanse of water, so the detail isn't great; but it was still an interesting sight to see. There were a number of cormorants among the herons, and we also saw a bald eagle. The eagle isn't in this clip, though.

The next video shows a cairn that someone had built at one of the stream crossings on the Grapeyard Ridge Trail. It was at another stream crossing on this trail where the video camera met its demise.

The steam engine that had rolled into the creek in the 1920s is featured in the following video.

Lastly, the final shot from the deceased camera was of the large root ball of a tree that had fallen victim to strong winds along the trail.

I hope you enjoyed seeing these clips from the little video camera that had served us so well during the last few years. It was sad to lose it, but we've replaced it already, with what is basically a newer model of the same camera.

I'll share some video from the new camera in future posts.

A Spring Visit to the Smokies

As many of you know, the Great Smoky Mountains National Park in Tennessee is one of our favorite vacation getaways. Our latest visit there was from March 26 to April 2, 2016.

One of our favorite trails to hike in the Smokies is Little River Trail because it's pretty and...well...not hard.

Doug and I have a good photography arrangement. I shoot stills, and he shoots video.


A favorite place to spend some quiet time is the overlook at Douglas Dam. The scenery is hard to beat, and the water around the dam draws an abundance of birds. In fact, there's a heron rookery in the woods at the base of the dam, where we also see cormorants, bald eagles, night herons, gulls, and terns.


We had planned to hike to a waterfall on Porters Creek Trail one day, but the parking area was full; and cars were lined up along the road leading to and from the trail. So we chose another nearby trail called Grapeyard Ridge Trail.


That stick in Doug's hand is actually a monopod, on which the video camera is mounted.

Grapeyard Ridge Trail doesn't boast any waterfalls. Its main claim to fame is the presence of an old steam engine lying in the creek where it tumbled off the road back in the 1920s.


The trail is also known for its many water crossings, none of which are bridged. Hikers must hop across on rocks, walk across on logs, or get their feet wet.

Injun Creek derives its name from the wreck, not from the Native Americans who used to live in the area.

The steam engine had been brought in to saw timber for a new school. Many of its parts were salvaged after the accident; the turbine and a couple of wheels remain in the creek.

On another day, we planned to hike a little way up Middle Prong Trail, but it was also very crowded. So, instead, we took a Quiet Walkway that begins at the same trailhead. There was an interesting vehicle that caught our eye in the parking lot, though.


Before I close this post, I need to bring you up to date on the video camera. After a few days of drying out, it did power up again. But the automatic lens cover wouldn't open and close, and the camera smelled like a muddy creek bottom. I checked into having it professionally cleaned and was told that it wouldn't be economically practical.

On the good side, I was able to recover the video from the memory card. And I've since purchased a new video camera from eBay, where I got a great deal on one that was being auctioned.

I tried out the new one this week and was very pleased with it. I'll post a video clip soon. Well, "soon" is a relative term, right?

Posted by Linda at To Behold The Beauty at 4:49 PM 8 comments: