We visited Ouabache State Park on August 8, where I captured most of the following images: 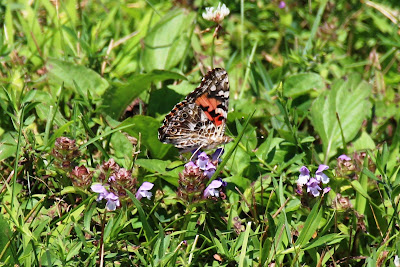 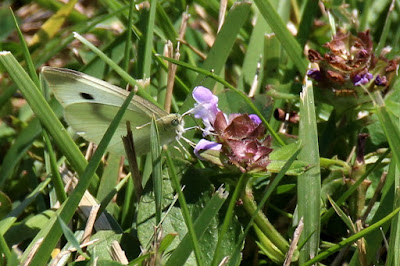 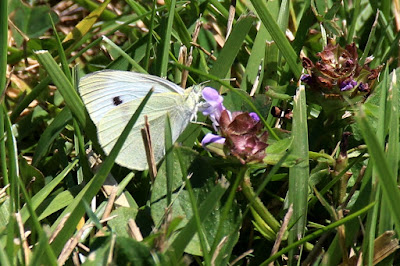 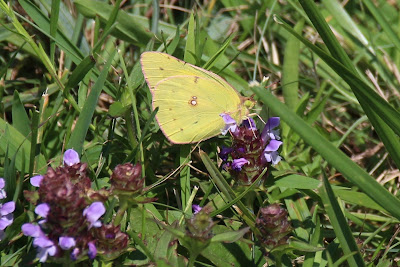 The following photo is of a tiny bouquet that Doug brought in from our yard yesterday, with a few Rose of Sharon blossoms and some wild daisies. It was such a cheerful little grouping...and sweet of my hubby to bring it in for me. 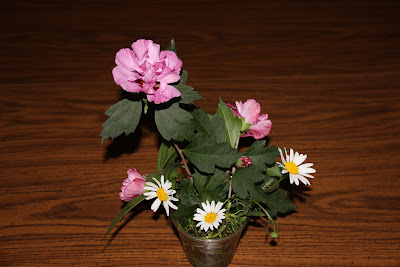 When Doug and I married in our forties, we never dreamed we'd live long enough to celebrate 30 years of marriage. But we did! We celebrated our 30th anniversary on Tuesday.

We've been so busy with our cataract surgeries that we weren't able to get away for any kind of a special celebration. But what we expected to be a very ordinary day turned out to be a very special one.

It happened to be the day of our church's monthly lunch and entertainment outreach to senior adults in the community (PEP). Vicki, one of our friends from church, was providing the musical entertainment for this month's PEP, along with a friend of hers from another church. And two dear friends, Terry and Diane, who live about an hour away, drove up to join us at PEP and to spend the day with us.

Vicki began an introduction to two songs that she said were in recognition of Doug and Linda's 30th anniversary. When she said that, I turned to look at Doug and saw him approaching me with a bouquet of red roses. He had managed to purchase them the day before, bring them to the church, and put them in a cooler to keep them fresh. Then he'd conspired with the pastors and with Vicki for just the right moment to present them to me.

The roses were a big enough surprise, but then Vicki began to sing "My Jesus, I Love Thee," a song that we had requested to be sung at our wedding. Doug had asked Vicki to sing that song at PEP, as another special anniversary surprise for me.

On our first anniversary, Doug had given me roses and a framed copy of the music for "My Jesus, I Love Thee," knowing it had special meaning for me.


After PEP, Terry and Diane went with us to visit the History Center in Fort Wayne, pictures of which were featured in my last post. I'm including a new picture below, taken from the rear of the building.

That awning you can see in the lower right corner of the picture of the History Center is part of a block-long area which is home to a Farmers' Market on Saturdays during the summer.

After the History Center, we took Terry and Diane to another nearby community, where there's an observation tower overlooking a very large stone quarry.

Then we had supper at a restaurant in the same community where the stone quarry is located, after which, we returned to our house for dominoes and dessert.

It wasn't a typical way of celebrating a major anniversary; but, at the end of the day, I couldn't think of anything else I'd rather have done. (Although, when we were at the stone quarry, Diane did suggest that our next stop should be a junkyard. Diane's a funny lady.)

There are some beautiful old buildings in downtown Fort Wayne, Indiana and in the old neighborhoods close to the city. The main focus of today's post is The History Center.

Built in 1893, the building originally housed the offices of city officials, as well as the municipal court and police department. At the south end of the building was the jail, or "calaboose." At the turn of the century the garage housed the city paddy wagon and hayloft for the horses which were stabled nearby.

Originally known as "The Fort Wayne City Building" and later as "The Old City Hall," the building was abandoned in 1971, as the city offices were moved to a new facility. 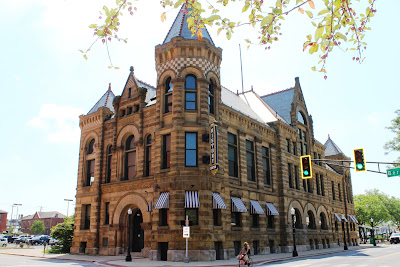 The Lincoln Tower, built in 1929-1930 was, for decades, the tallest building in the state of Indiana with its 22 floors. It no longer holds that distinction, but it's still a beautiful structure. My mom worked for a law firm on the 17th floor of that building for years, so it holds a special place in my heart.


I'd been wanting to capture some images from the city to share here on the blog but never had much occasion to go downtown. Recently, though, all the appointments related to my cataract surgeries have been taking me there.  My doctor's office and surgical center are in the same block as The History Center, and I couldn't resist taking my camera with me one day and capturing these few images. Hopefully, there will be more forthcoming as there are many worthy architectural subjects to choose from in this city.

By the way, my eyes are now doing quite well. The doctor intentionally made my right eye a bit nearsighted, while giving me increased distance vision in the left eye. It allows me to see both far and near without glasses, which is a good plan. I'm finding it challenging to get my eyes synchronized with each other, but I'm seeing better now than I've ever seen before in my life. Hallelujah!

Email ThisBlogThis!Share to TwitterShare to FacebookShare to Pinterest
Labels: Misc

Pictures from the Park

We've found ourselves with limited no time for travels this summer, primarily due to doctor appointments. There's nothing major going on, just a full calendar.

We've been able to work in a mini-vacation now and then, usually a day trip to Ouabache State Park about an hour away. These photos are all from that park.


Some of what's been going on with Doug and me revolves around cataract surgeries for both of us. Several appointments are required, both before and after the surgeries. My first surgery was done on July 19 (right eye) and the second on August 1 (left eye).

I've always had terrible vision. I was so nearsighted that, without glasses, nothing would come into focus until it was just inches from my face. I've looked forward to cataract surgery for several years, ever since my optometrist told me that a lens implant had been developed that could correct much of my severe astigmatism. Of course, I opted for that lens when I had my surgery. And now, following surgery, I do see so much better...but not great.

I'm pretty sure I'm going to need glasses, but they want me to hold off getting them for several weeks, to allow time for the eyes to fully heal and settle into their optimal visual capability.

It's going to be a challenge for me because I don't currently see well enough to drive.

Doug's going to get his cataracts removed this month, but I'm hoping his experience will go more smoothly than my own. He actually has very good distance vision and mostly needs glasses to read. Hopefully, his post-surgery vision will be 20/20 without glasses so that at least one of us will be able to drive.

Here's a statement I recently saw on Facebook: "I really don't mind getting old...but my body isn't taking it very well."

That statement resonates with me. Getting old isn't for sissies.