Doug and I had been planning to take a trip to some of our western states in August. It was to be a combination of a celebration of our 29th anniversary and an opportunity to see our friends, John and Betty, in chariot races in Dubois, Wyoming on August 13th.

When it became apparent that the health of our friend, Dave, was quickly deteriorating, we cancelled our planned trip, wanting to be home to lend what support we could to Kay and to attend Dave's funeral.

Dave died the day after we cancelled our reservations, and his funeral was scheduled for August 10, the day that we had originally planned to leave. We talked it over and and decided that, if we left right after the funeral and burial, and drove hard for two and a half days, we could make it to Dubois in time for the chariot races.

The first day's travel took us through Indiana, Illinois, and Iowa. We stopped for the night on the eastern edge of Nebraska. The next day, we crossed Nebraska, then took U. S. Highway 26 toward Scottsbluff. It's a route that we followed in 2013, so some of these photos may look familiar.


We both remembered the beauty of Lake McConaughy and looked forward to stopping at that overlook again.

Dusk was falling and a storm was approaching as we left Lake McConaughy and continued on toward Lewellen, Nebraska, where we had a lodging reservation for that night. 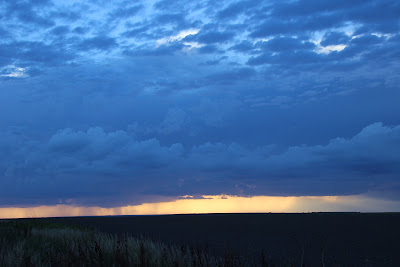 It was getting too dark for good photos by the time we saw this old sod house and a historical marker for Windlass Hill Pioneer Homestead. It was part of Ash Hollow State Historical Park. If we ever get back that way, I'd like to plan some time to explore that area. It was part of the Oregon Trail route followed by westward-bound pioneers, and it's said that there are still visible wagon ruts on Windlass Hill.

Lewellen, Nebraska is a very small town. We stayed the night at the Gander Inn, pictured in the next two photos.


Following are a few pictures of the main street of the town of Lewellen. The Gander Inn didn't provide breakfast for its guests, but the hostess informed me that breakfast was available at the art gallery starting at nine in the morning.

We didn't have breakfast at the art gallery because we wanted to get on the road earlier than when they began serving. A man who saw us taking pictures encouraged us to at least go over and have a look around. We said we understood they didn't open until nine. He said, "She'll be in there cooking now and would be glad to let you in to look around." But we declined. We should have stayed and had breakfast there, though, because we wound up driving an hour or more before we found a place to eat.

More from our Trip West 2016 to come in future posts.

Our dear friend, Dave, went home to be with the Lord on Saturday, after a relatively short battle with cancer. These final weeks of his illness, and now his homegoing, have found us thinking back over the 20 years of our friendship and remembering some of the special times we've had together.

We met Dave and Kay in February, 1996, when we visited the church that they were attending. They were warm and friendly and invited us to come to their home that evening to join a group that met there on Sunday nights for Bible study. That was the beginning of an enduring and very special friendship.

The four of us flew to Myrtle Beach for a few days between Christmas and New Years in 1997. Their daughter, Kelli, worked for an airline; so Dave and Kay could fly standby for free; and they were able to get companion tickets for us. For a minimal additional fee, we could fly in the first-class section if there was an opening. There were only two seats available on the first flight to Charlotte, North Carolina; and they were in first class. Dave and Kay let us take those, while they waited for the next available flight.

As we waited in Charlotte for the arrival of our friends, I struck up a conversation with a young woman who was also waiting for someone, and we chatted for quite awhile. When the announcement came over the public address system that a plane was arriving from where we'd last seen Dave and Kay, I turned to the woman next to me and said, "I hope our friends made it on this flight. We were all flying standby and my husband and I got on the first flight."

Imagine my astonishment when she looked at me and said, "Are you Doug and Linda?"

Here, I'd been talking with Kelli, the daughter of our traveling companions, all that time without knowing who she was. She lived in Charlotte, and Dave and Kay had called her to tell her they were coming through the Charlotte airport. She had come to the airport to see them before they went on to Myrtle Beach.

The four of us have been together in our beloved Smoky Mountains several times over the years. In 2000, we rented a cabin together there. During the day, we would go out exploring the national park. For our evening entertainment, Dave had brought four "Star Wars" movies with him: the original trilogy and the first movie of the prequel trilogy. And we watched one every night.


Dave and Kay had previously lived in Tulsa, Oklahoma; and Dave always raved about Mazzio's Pizza in Tulsa. He always said we were going to have to go there for pizza someday. Well, in 2001, we did. We drove nearly 800 miles to get a Mazzio's pizza.

There were no cars at the restaurant that Dave had frequented when he lived there, so we went to another Mazzio's. The pizza didn't live up to Dave's expectations. He was so disappointed and disheartened. The rest of us all thought the food was good, but it just wasn't the way Dave had remembered it. It came close to ruining the trip for him. But a stop in Branson, Missouri, to enjoy some shows there on our way home, went a long way toward making up for the Tulsa disappointment.


On New Year's Eve, 2004, we all went out to dinner with Kay's sister and brother-in-law, Pat and Wayne. Then we went back to Pat and Wayne's house, where Pat had made a delicious German chocolate cake in celebration of my birthday, which had been the day before. After cake and ice cream, we enjoyed fellowship and card games, ending the evening with prayer for the new year.

On Doug's and my 22nd anniversary in 2009, we asked Dave and Kay to go with us to a Spike and the Bulldogs concert at a local outdoor theater. (It's a group that plays the music that was popular during our teen years.) They accepted and invited us over to their house for a cookout before the concert.

They joined us in the Smokies again in 2011.

Dave loved music and was a genius with anything technical. He used those talents in service to the Lord, working with sound and lighting in more than one church. And he was always willing to help us out if we had a problem with anything in his area of expertise.

I remember one time, we were having a problem with our stereo system. Dave read our stereo manual while the four of us were playing Euchre. (For those of you not from the Midwest, that's a card game.) Dave never missed a beat during the game; and, when it was done, he knew what was required to get the stereo working better.

As you can imagine, in 20 years of friendship, we've accumulated more memories than can be recounted in one blog post. We're grateful for the memories. And we know we'll meet again. But we're going to miss our friend in the meantime.

As I mentioned in the last post, we enjoyed our 1995 trip to Lost Valley Ranch enough that we went back in 1997, for Roundup Week, the last week of October.

A blizzard hit Colorado the weekend that we flew out there. Our flight out was delayed by 45 minutes, to allow time for the airport in Colorado Springs to clear a runway for us.

At the ranch, we were somewhat dismayed to realize that we'd been assigned to one of two cabins located at the top of a steep hill. The cabins were appropriately named "Huff" and "Puff" because those who occupied them were definitely huffing and puffing after climbing that hill.


We had to hike up and down that hill at least three times a day...or go hungry!

Although this was Roundup Week, they didn't send us out looking for cows on the first day. Instead, the morning and afternoon rides on Monday were just pleasure rides. There was an embarrassing moment when my horse, Stinky, decided to lie down in the snow on the trail. I was able to get off her, but getting me back on her proved to be a bit of a challenge. Another guest strode confidently to me and tried to give me a leg up, but I proved to be too heavy for him. The wrangler who was leading our ride tried next and was, thankfully, successful.

The ranch is truly a guest ranch, but they did run about 85 head of cattle on 25,000 acres of Pike National Forest. Their lease required that the cattle be removed from the national land by October 31st each year. The blizzard had driven about half that number to return to the ranch on their own. That made finding the rest of them something like looking for the proverbial needle in a haystack.

During Roundup Week, a trail guide would take us out some distance from the ranch, then turn us loose to look for cattle to bring back to the ranch.

On the first day of that activity, Doug and I got separated from everyone else and, at one point, even from each other. Fortunately, our horses kept calling to each other until we were reunited. But, on the upside, we did find five cows and a bull on our way back to the ranch. Meanwhile, our trail guide had radioed to the ranch that we were lost; and three other ranch employees stayed out to look for us.

On Friday, we went on an all-day ride (roughly 17 miles over some pretty rough terrain) to look for the last four cows still to be found and brought back to the ranch. It was the hardest and longest riding I've ever done; but, oh, it was beautiful! The rest of the photos are all from that ride. 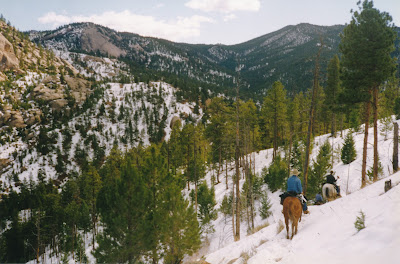 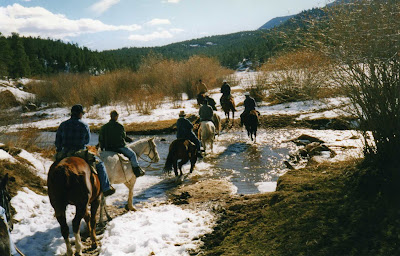 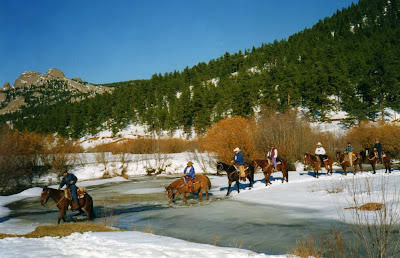 That long ride didn't result in finding those last four cows. As we neared the ranch on our return trip, Doug and I and another man decided to follow the road at a leisurely walk, while the others chose to continue beating the brush in a search for those missing cows. To our delight, though, we three found the cows on the road to the ranch and brought them the rest of the way in.

For a long time after our return home, Doug said that, when he looks out the window and sees an Amish horse now, all he can think about is how glad he is that he doesn’t have to get on it on go riding after cows!