Happily on our way out of Hanksville, Utah on our trip West a few weeks ago, we drove west on Utah Highway 24 towards Capitol Reef National Park. 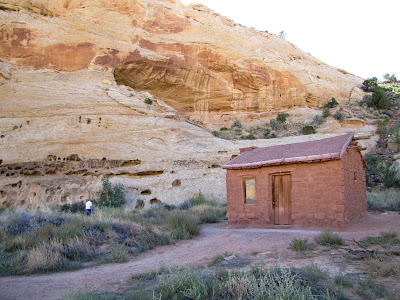 A sign near the Behunin Cabin said that the cabin was built in 1882 by Elijah Cutler Behunin and his family. It also said that it was a family of ten. Father, mother, and the two smallest children slept in the cabin. The older girls made a bed in an old wagon box, and the older boys widened a dugout in the cliff for a place to sleep.

On down the road, we came to a turnoff for Hickman Bridge and stopped to investigate. It was a one-mile hike to a natural stone bridge. Doug was ready for a little physical activity by then, and I wanted to see the natural bridge myself. So we decided to hike it. Well, you can't believe how hot the sun is there in that part of Utah. There are almost no trees, and what trees there are are very small; so there was virtually no shade on the trail. And it started right off with a pretty good climb. 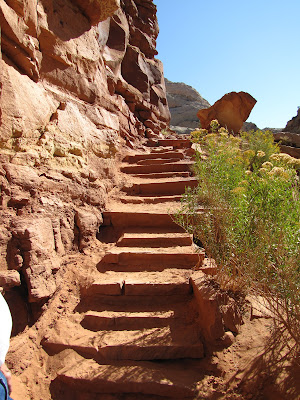 The beginning of the Hickman Bridge Trail

There were times I wanted to quit...mostly when I thought about the effort it was going to take to return the one mile to the car...but we kept plugging along and eventually arrived at what we thought was the natural bridge. 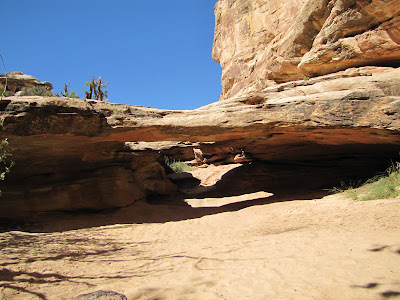 What we mistakenly thought was the Hickman Bridge

It was smaller than I had expected, but I was just relieved to have reached my destination. Then we heard voices from hikers on the trail past the bridge that we were photographing. It turned out that we were at the wrong one. So back on the trail we went for probably another quarter of a mile, and there we found the Hickman Bridge. It was much more impressive than the little one we had seen earlier. 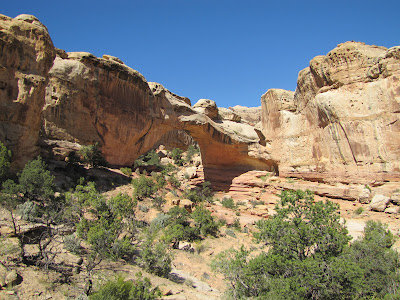 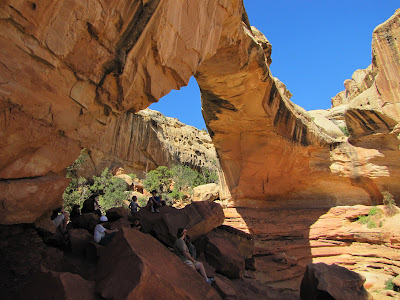 Hot and weary hikers were taking advantage of the shade under the bridge.

Doug saw a trail going on beyond the bridge, and he wanted to follow that for a ways. I remained in the shade of a small tree, where I had a little breeze, and waited for him. 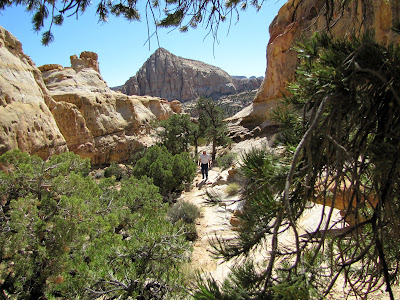 By the time he returned, most of the crowd of adults and children at the bridge had started their hike back to their cars. So we had the place to ourselves. There was just total silence. It was something we rarely experience in the busy world of today.

We met another couple as we began our hike back to the parking area. They were from Maine and were just beginning their return trip, too. So we walked together, talking about various places we'd each seen and just enjoying each other's company; and, almost before we knew it, we were back at the parking area. I told them that Doug was grateful for their company on the hike because there was much less whining from me with them around. As we parted ways at the parking area, the man told me I could start whining now.

We were just fried by the time we made it back to the car. We each grabbed a water out of the cooler and downed it. Then we cranked up the air conditioning in the van and set off in search of a shaded picnic area. We found a very nice one. It was a little crowded when we arrived, but a couple vacated a shaded table within a few minutes. Never had a peanut butter and jelly sandwich tasted better.

Capitol Reef National Park has some amazing scenery, but I'll save that for another day.

Posted by Linda at To Behold The Beauty at 10:32 AM