After visiting Zion National Park on our western travels a few weeks ago, the next stop was Page, Arizona, where we took a float trip down the Colorado River through Glen Canyon. Thanks go out to Elizabeth Grimes of Magical Moments for suggesting that activity to us. 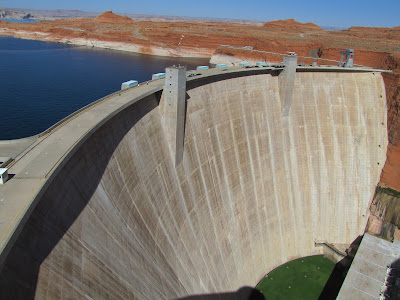 The Glen Canyon Dam, at 710 feet high and 1,560 feet long, is one of the world's largest concrete dams. Lake Powell, formed by the dam, extends 186 miles upstream into southern Utah.

The buses took us through a two-mile-long tunnel which descended to the bottom of the Glen Canyon Dam. When we exited the bus, we were given hard hats to wear as we walked under the Glen Canyon Dam Bridge and down to where the rafts were waiting for us at the river's edge. 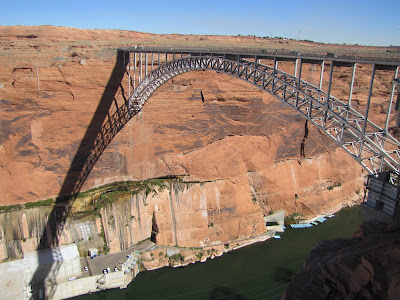 If you look closely at the picture above, you can see the parking area where the buses exited the tunnel. To the right of that is the walkway down to the river's edge and the rafts we were to board.

The Glen Canyon Dam Bridge is 700 feet high and 1,271 feet long. At the time of its completion in 1959, it was the highest arch bridge in the world and the second highest bridge of any type. Fifty years later it seems hard to believe that it no longer ranks even among the top twenty-five. 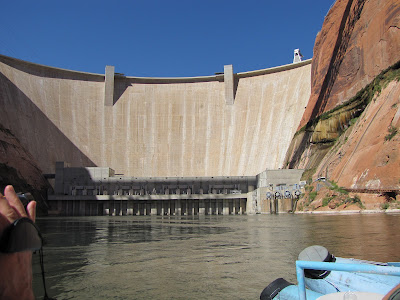 A picture of the dam from down on the river. 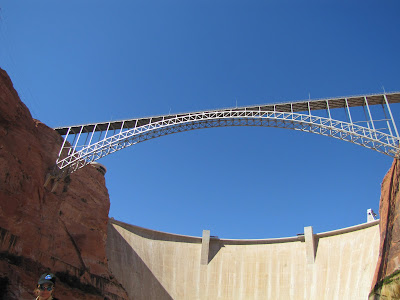 And a picture of the bridge from underneath. 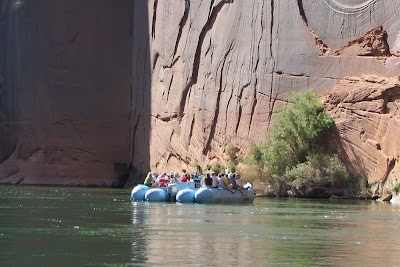 The above photo shows one of the pontoon rafts.

Each raft carried about 22 people, and there were at least four or five of the rafts. The trip took us 15 miles down the Colorado River, from the Glen Canyon Dam to Lee's Ferry, which marks the beginning of the Grand Canyon and also the beginning of whitewater rapids on the river.

Following are a few pictures of some of the scenery along the river trip: 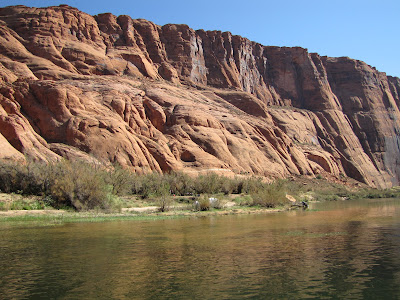 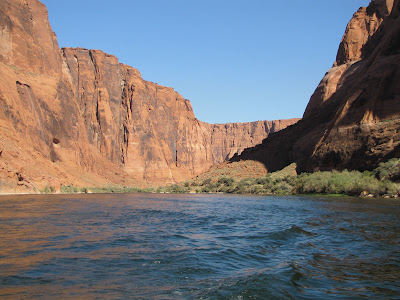 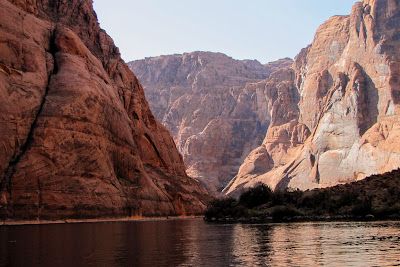 Our guide was an enthusiastic and energetic young woman, a senior at the University of Arizona, majoring in biology. She pointed out an Osprey, flying over the water, but I wasn't able to get a very clear picture of it. We also saw three Great Blue Herons. At the end of the trip, when we were almost to Lee's Ferry, some mountain sheep were spotted on the hillside, and we pulled over to watch them for awhile. A previous post included a photo of one of the herons and another of the mountain sheep. Click here if you missed that one.

Midway through the trip, the rafts docked at a sandy beach. Those who wanted to could wade or swim in the river. There were toilets available there, too, and some Indian rock art a short walk away. Doug and I didn't do any exploring or swimming at the stop. We had bought a sack lunch from the rafting company and ate that while we were at the beach area. It was just too hot to do much else. The heat wasn't bad while we were moving along on the water, but stopping was another matter.

We were met by buses at Lee's Ferry and were transported about an hour's ride from there back to Page, Arizona.

Next stop: the Grand Canyon.