Doug and I went for a walk one August morning, deciding to walk down to the end of the road and back. As we were on our way back, we could see a team of Amish draft horses coming toward us. An Amish woman was walking down the middle of the road, kind of behind and to the side of the horses; but we couldn't see anyone handling the reins on the team.

When we got close enough, though, we could see a little tow-headed boy, probably about four years old, walking behind the horses and holding the reins. His dad was cutting hay in the field with a team of horses, and the boy and his mom were bringing another team to give the first team a rest.

We stopped to talk with them, and the woman said that she told the boy she was going to take another team to Dad, and he could come along. She said his response was to say, as if in awe, "Gee, I'm a lucky boy." And he really meant it. She said he loves to do anything with the horses. The dad was pretty proud, too, pointing to his boy and saying he was a little farmer in the making.

I so wished I could have snapped a photo of the little guy driving the team of draft horses, but the Amish really don't like to have their pictures taken.  I did manage to catch the following one with a zoom lens and from behind, though. 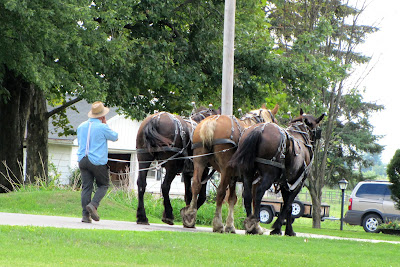 You'll just have to use your imagination to replace the young man in the picture with the little tow-headed boy that we saw.

Email ThisBlogThis!Share to TwitterShare to FacebookShare to Pinterest
Labels: Amish