As we continued on our 400-mile loop drive from Hanksville, Utah, through magnificent scenery and various national lands, we came upon a rock formation known as Church Rock. 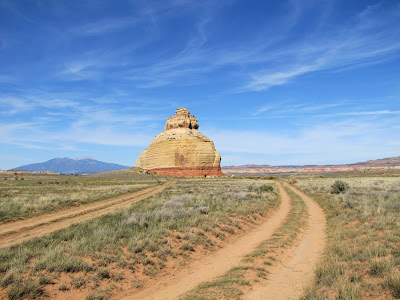 
We had seen and photographed Church Rock when we passed through the area in 2009. This time, however, we saw a couple of cars parked at the base of the rock formation. The gate in the fence was open, and there was a dirt track leading back to where the other cars were parked. Unable to resist the temptation, we turned off the highway and onto that dirt track. Well, we quickly saw that a high-clearance vehicle would have been much better suited to the terrain than our minivan was. But, once our wheels were in the track, there was no way to turn around. We were committed.

We had been curious about the cave-like opening in the base of the rock formation and were glad for the chance to get a closer look. 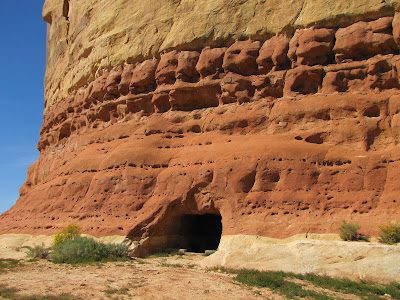 Following is an excerpt from Wikipedia regarding Church Rock:

One of the interesting pages of 1930's history tell about Church Rock, and how the gumdrop shaped rock earned its name. The story is that Marie Ogden's Home of the Truth, an Utopian community, was responsible. With a small band of followers, Ogden's group moved onto a tract of barren land along Utah's Route 211 in 1933. Members, abiding by a strict code of conduct, were expected to work for the common goals of the settlement. Women tended to the domestic chores and men worked the arid farm acreage. Not far from their farm, the group set upon a grand plan to hollow out the entire center of a sandstone remnant (by hand) to build a church. Today, the only evidence of this ambitious plan is the beginnings of a 16 by 24 foot opening chiseled into the rock. A few miles from Church Rock are the remains of Ogden's ghost town. A few buildings and a small cemetery are all that remain of the Home of the Truth community, found on a ridge called Photograph Gap.

Just past Church Rock was the turnoff leading to the Needles District of Canyonlands National Park. Along that road, we came to the Newspaper Rock State Historic Monument, one of the largest, best preserved and easily accessed groups of petroglyphs in the Southwest. 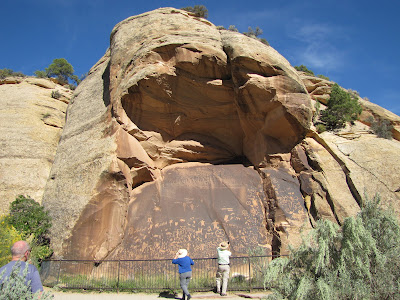 
Following are photos of some of the scenery we enjoyed as we continued on down the road into the Needles District of Canyonlands. 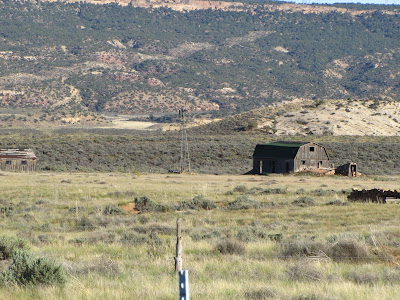 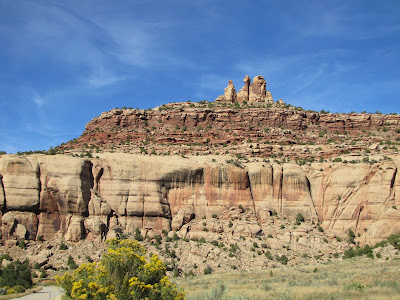 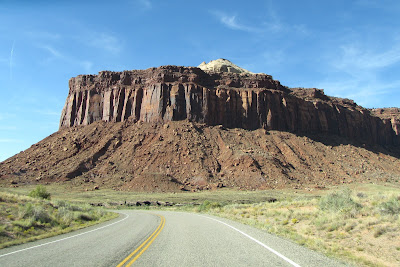 Unfortunately, it was late afternoon by the time we reached the Visitor Center at Canyonlands; and we still had miles to go before we slept. We went into the Visitor Center and looked around a little, but we decided we just didn't have the time to fully explore this part of the national park.

We returned to the main road and proceeded on north to Moab, then east and south to return to Hanksville for our last night there.

Posted by Linda at To Behold The Beauty at 5:47 PM