Did your mom ever tuck you in at night with that little phrase, "Good night. Sleep tight. Don't let the bedbugs bite."? I grew up thinking that was just a little saying that adults said to children, never even considering that such things as bedbugs actually existed.

Then, a few years ago, bedbugs became headline news when bedbug outbreaks began occurring in public places such as hotels, movie theaters, clothing stores, and public transportation. The enlarged pictures of the tiny little nasties, featured on television news reports, were fuel for nightmares.

As much as Doug and I stay in hotels and motels on our travels, that news caused us some concern. We always comforted ourselves with the knowledge that we generally stay in nicer places. We learned long ago the importance of a clean, quiet room with a comfortable bed for getting a good night's rest. So we are willing to pay a little extra for that. We don't look for the really fancy places, just clean, quiet, and comfortable.

When choosing lodging, I usually start with the American Automobile Association (known as "Triple A" or "AAA"). I find hotels on their site that are within our price range. Then I go to TripAdvisor.com and read reviews of those hotels before choosing one. So I'm careful.

But it happened to us. We were staying in a hotel that is part of a nationally recognized chain of hotels. It appeared very clean and well furnished. We had both showered and gotten ready for bed and then settled down to read for awhile. A movement on the bed caught Doug's eye. When he looked up, he saw a tiny bug crawling on the bed. He got up and killed it, then sat back down to read again. Soon, he saw another tiny bug on the bed. He killed that one, too, and put both of the little carcasses in a tissue before calling me over to look at them.

I got my camera and took a photograph so that I could enlarge it and get a better view of them. 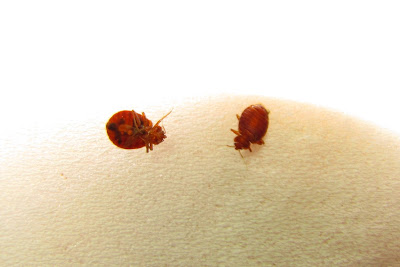 There was no doubt in my mind what they were. They looked just like the nightmarish pictures I remembered from those television news stories. And then, to make matters worse, we saw two more crawling on the wall. And, when Doug pinched a miniscule spot off his tee shirt, he had blood on his fingers. It apparently was yet another bedbug, and this one must have bitten Doug before he killed it.


We called the front desk and told them about the bugs, inviting them to send someone up to see them for themselves. The manager came himself. He seemed totally shocked at the realization that there were bedbugs in his facility. He offered to help us move our things to another room. But we said we were checking out and moving on.


So, although it was almost midnight, we packed quickly, checking our things as carefully as we could in an attempt to avoid having any little hitchhikers traveling with us, and put about 85 miles between us and that place before stopping for the night at another hotel. This one was a bit on the shabby side, but we saw no vermin and slept well.

As for hitchhikers...so far, we've not seen any sign of them.

Email ThisBlogThis!Share to TwitterShare to FacebookShare to Pinterest
Labels: Traveling