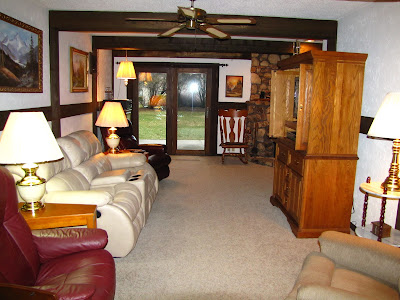 This is our no-longer-sunken living room, now with the old carpet reinstalled and the furniture moved back into place. It looks inviting and innocent, doesn't it? Well, let me tell you...looks can be deceiving.

After filling in the sunken living room with seven inches of cement, we had to wait three weeks for the cement to be sufficiently dried to permit the carpet and furniture to be put back. We spent two of those weeks on a trip to Florida, to get away from the disorderly house.

The second day after our return home, the carpet layers came to reinstall the carpet. Within an hour of their departure after finishing the job, I went sprawling onto the newly laid carpet, having forgotten that the seven-inch step down into the living room was no longer there.

Later that evening, I was in the computer room when I heard the sound of rapid and heavy footsteps on the wooden floor of the entryway, accompanied by an astonished catching of breath, as Doug struggled to keep his feet under him, having forgotten that he didn't have to step up the seven inches to exit the living room.

As the days went by, we became practiced at talking ourselves through each entering and leaving of the room; and, although there were some close calls, there were no more falls.

Then, tonight, Doug was in the computer room with me when the hour rolled around for one of his favorite television programs. He dashed for the living room, to turn on the set before he missed something important on the program. From the computer room, I heard it...splat...the sound of a body skidding across the carpet in a belly flop.

From the computer room, I called out, "Did you fall?"

From the floor of the living room came the answer, "I'm not telling."

We're getting too old for this.

Update October 16, 2015...My niece, Beckie, found this Minions cartoon, and I couldn't resist adding it to this post: Thanks to Hilary at The Smitten Image for including this post as a Post of the Week. 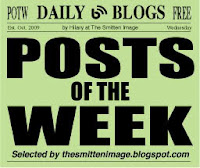 Posted by Linda at To Behold The Beauty at 10:19 PM