Our tour of Monument Valley on October 14, 2018, was truly a highlight of our Last Hurrah trip in October. The drive from Blanding, Utah south to Monument Valley is, itself, stunningly beautiful.

On a previous visit here, Doug and I opted not to spend the money for a tour of the valley that would get us up close and personal with these impressive sandstone monuments. But, since this was our Last Hurrah, we hired a tour guide this time. It was definitely worth it. The following images were captured on that tour. Look at how tiny the cars appear in the photos, to get a better perspective on the size of the monuments. 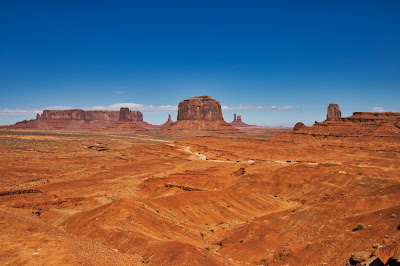 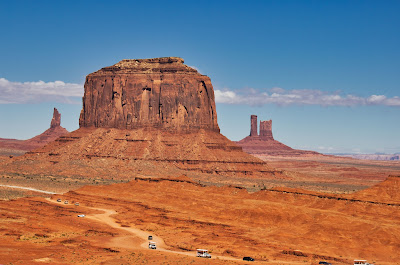 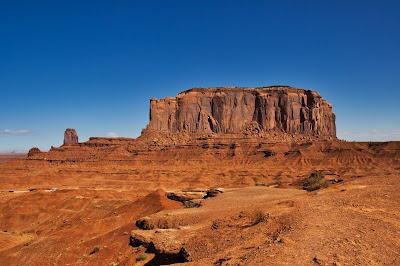 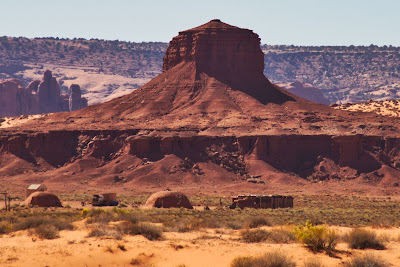 The picture above isn't a great photo. I included it because it shows some Navajo hogans. There are a few Navajo families still living in Monument Valley in these traditional dwellings. 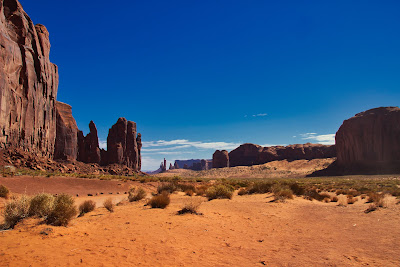 We spent more time at Big Hogan than we did anywhere else on the tour. Our tour guide, Tony, had a drum and drumstick with him and played and sang a couple of Navajo songs here, where the acoustics were great. 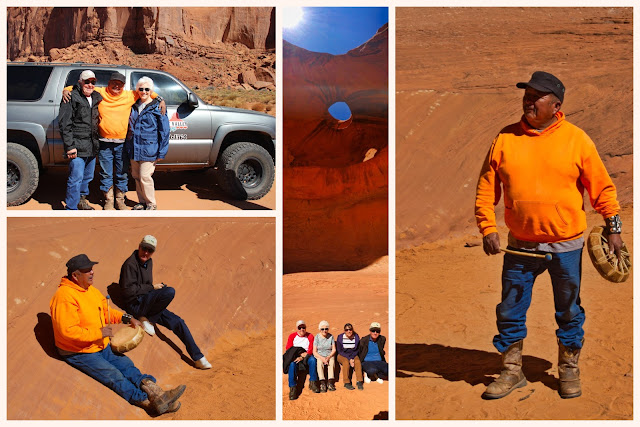 My left hip and both knees were in very bad shape during this entire trip, but they reached new levels of pain and stiffness on the day of our Monument Valley tour. Originally, the vehicle for the tour was to have been an open-air vehicle, but they substituted the truck seen in the photo of Tony, Doug, and me because of cold temperatures (46° F) and strong winds, creating blowing dust.

Six of us showed up for the tour. One couple dove for the two captains chairs in the middle. One tall man (Ed) took the front passenger seat for the leg room it offered. That left his wife (Wendee) and Doug and me to sit in the third-row bench seat.

It was so difficult for me to even get into the truck that Doug had to do some pushing and praying. Finally, I was on my knees on the floor of the middle section, trying to figure out how I was going to get to that third-row seat. With the other two people already in the center seats, I had nothing to grab onto to try to pull myself up, and there just wasn't much room to allow me to crawl through the opening between those two captains chairs. It was ugly, I tell you.

Finally, I was in the back seat, by the window on the left side. Wendee was by the window on the right side, and Doug sat between us. I was doing some self-talk by then. I knew I'd never be able to get out to take pictures at any of the scenic stops along the way, so I decided that I'd just stay in the truck and enjoy the views through the window. Doug had our video camera, so I knew I'd be able to relive the trip later through his video.

As the tour began, our driver's cell phone rang. It turned out that the couple who had grabbed the middle seats were on the wrong tour. So Tony turned around to take them back to the Visitor Center to pick up their correct tour. And the other two people who were supposed to be on our tour didn't show up. So that meant there would just be Tony and four passengers. Hallelujah!

Ed still stayed up front with Tony. Wendee insisted that Doug and I take the middle section. She didn't mind sitting in the back, and her much younger (and thinner) body could navigate the process of getting in and out better than my somewhat older and stiffer (and not so thin) one could.

The tour was wonderful after that. A portable step was found that made my getting in and out of the truck something that I could do without a push and a prayer. Well, there may still have been a prayer. Exiting the truck from that center seat was just a matter of hanging my feet over the edge and sliding out. So I got along fine, even without the helping hand that Ed offered me at every stop.

Just to let you know, virtually all that pain and misery left my body unexpectedly about five weeks later. I still have some residual effects, both in the hip and in the knees; but I'm so, so much better than I was that day at Monument Valley. And I'm working at dropping some pounds, in hopes that my joints will forgive me for the stress I've put them through in recent years and will be nice to me from now until the Lord returns or calls me home.
Posted by Linda at To Behold The Beauty at 9:06 PM