A Drive in the Country

It was such a pretty day yesterday that Doug and I decided to take a drive out to the little town where I had lived when I had my horses. We had heard about a little restaurant there that we wanted to check out, so we timed our visit to coincide with supper.

After our meal at the restaurant, we drove out past the farm that my folks had owned and where I had rented space for my house trailer. It's been 25 years since my dad's health forced him to sell the farm. He moved into an apartment in town; and I purchased a small house for myself and our two dogs, Heather and Brandi. 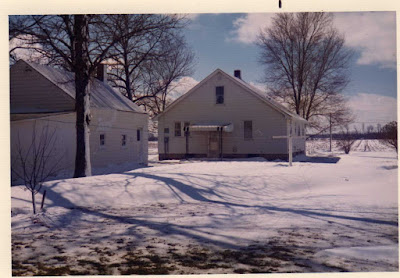 The above photo, taken in 1973, shows the back of Dad's house. No one used front doors in the country, so the back door was the main entrance.

The photo looks west toward the road and the open field across from the house. The white building on the left is the garage. The road in front of the house ran north and south, and the wind blowing across those open fields created some challenging snow drifts in winter. Sometimes a snow of just a few inches could pile up in our road and leave us stranded. There were only three houses plus my trailer and my nephew's trailer on our short road, so it was not a high priority for snowplows. 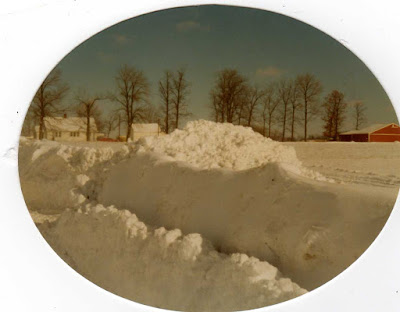 The photo above was taken in 1977, and provides a view of the house, garage, and barn, as well as some of those challenging snow drifts.

This shot was taken yesterday, from approximately the same place as the preceding photo and shows the amazing transformation wrought on the house by the folks who purchased the farm from Dad. 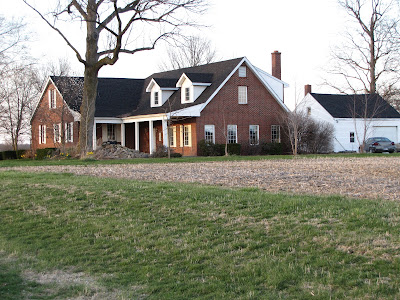 Here's a closer look at the remodeled house. Hard to believe it's the same house, isn't it? I marvel every time I see it. I'd love to see the inside, but I've never had the courage to ask. When this family originally purchased the farm from Dad, they could see how much he loved it; and they extended an open invitation to him to come and visit any time he wanted. He never did, and neither have I. 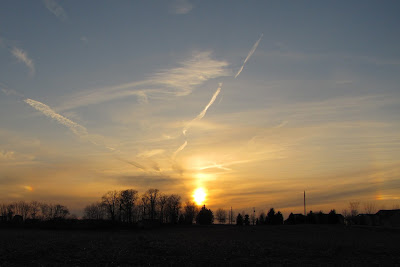 As we were driving home last night, the sun was sinking in the west. They're difficult to see in this photo, but there are sun dogs on either side of the setting sun. A nice way to end my nostalgic walk down memory lane.

Posted by Linda at To Behold The Beauty at 11:37 AM