A Little-Known Fact About Aging

There's something about aging that you younger folks might not know. I didn't know it myself until...well...until I got old.

You see, the thing is, we don't KNOW we're old. Oh, we know our chronological age, and we know that people of that age are traditionally thought of as old. But the truth is, there is a teenager trapped inside that aging body.

Sometimes that gets us into trouble, as when I recently ran (literally) to the garage to get something out of our vehicle. As I turned to run (literally) back into the house, my shoes slipped on the garage floor; and I went down. Hard. The old body, with its slower reflexes, betrayed the teenager inside who felt just as agile as ever.

Sometimes this little-known fact of aging just creates humorous moments, as last week when I heard strange sounds coming from the kitchen. I was, as usual, in the computer room at the other end of the house. What I was hearing sounded like something plastic being bounced on the kitchen floor.

I called out, "What are you doing out there?"

Laughing, I called back, "What is this...the senior version of 'kick the can'?"

Then I went out to the kitchen and found Doug tossing an empty pill bottle over his head and behind his back and catching it. Well, catching it some of the time.

My 16-year-old-in-a-70-year-old-body husband was just checking to see if he still had the moves from his baseball-playing days.

I love the boy in that man.

Thanks to Hilary at The Smitten Image for including this post as a Post of the Week. 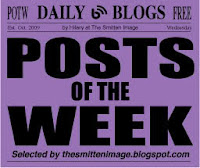